When Bonner County commissioners voted unanimously to approve a letter of support for the “North Coast Hiawatha Restoration” as part of their May 11 business meeting consent agenda, the item saw very little pomp and circumstance.

Deputy Clerk Jessi Webster told the Reader that the commissioners drafted the letter at the request of Big Sky Passenger Rail Authority: a group of Montana counties that formally joined forces in November 2020 to advocate for revitalizing passenger rail in the West, starting with the North Coast Hiawatha route, which from 1971-1979 ran from Chicago to Seattle, making its way through southern Montana — and Sandpoint — along the way. 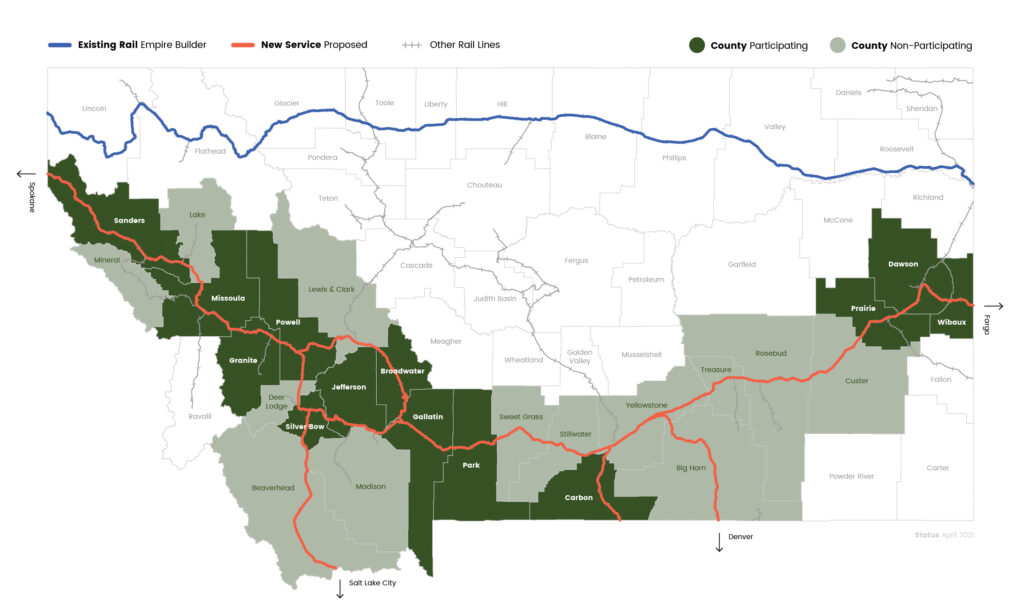 A map of the state of Montana, showing the existing Empire Builder passenger rail route in blue and the decommissioned North Coast Hiawatha passenger rail route in orange. Counties highlighted in dark green are on board with the Big Sky Passenger Rail Authority’s efforts to reopen the route, while those in light green have yet to sign on. Map courtesy of Big Sky Passenger Rail Authority.

“As America considers the future of its transportation infrastructure, we fully agree with the BSPRA that passenger rail should be an integral part of that future,” stated the letter of support. “Passenger rail service provides an affordable, efficient means of transportation, good-paying jobs and economic opportunity to the communities it services.”

The letter, addressed to Idaho Sens. Mike Crapo and Jim Risch along with Reps. Russ Fulcher and Mike Simpson, acknowledges that “Bonner County [is] intimately familiar with the multiple benefits of passenger rail service through Amtrak’s Empire Builder, which generates an estimated $327 million in annual economic activity for the communities it services.”

The Empire Builder route runs through Sandpoint, along the northern border of Montana and into North Dakota.

“I looked at this a few different ways, but the most important factor was that passenger rail would connect the more populated areas of Montana, giving those folks the ability to hop on a train to visit our beautiful county,” BOCC Chair Dan McDonald told the Reader. “It will bring additional economic prosperity to our local businesses and provide an easy and economical form of transportation both ways versus having to make the drive.”

With its letter, Bonner County joins a bipartisan effort that is seeing new life after four decades of failed attempts to make rural voices heard in Washington, D.C., when it comes to restoring passenger rail in the sparsely populated West.

According to Missoula County Commissioner and BSPRA Chair Dave Strohmaier, “there is finally some real consideration of a major infrastructure package for this country.”

“We are in the thick of it right now, creating the organization itself from scratch, and also recognizing that we’re in a pretty unique time, I think, politically and socially in this country to maybe have a real shot at making this happen this year,” Strohmaier said, “and not simply conducting another study that gets the dust blown off it 10 years down the road.”

Part of that hope comes from the bipartisan nature of the effort, exemplified by a blue Missoula County-born idea garnering support from traditionally red Bonner County, and several other conservative counties across Montana.

“I’ve rarely seen an issue where you could bring together as diverse a collection of counties — geographically, demographically, ideologically, politically — as with passenger rail,” Strohmaier said, adding later: “We’ve managed to rally around an issue that really demonstrates that it’s possible in this country to agree on a few things even in the midst of this really … divisive political rhetoric that we have grown accustomed to.”

Arguments for restoring the North Coast Hiawatha route range from economic to cultural to simply practical: Across large swaths of Montana, driving is the only way to get around. For an aging population, that can mean driving — in all kinds of weather — up to 170 miles to the nearest urban center for health care services.

While reinstating passenger rail in southern Montana will require an investment of $40 million-$50 million to upgrade existing tracks and stations along the route, Strohmaier argued that passenger rail should receive the same treatment as all transportation infrastructure — the question should not be whether the system “pays for itself” but, rather, how it could boost local economies and improve the lives of the people who utilize it.

“There should be no difference in [critics’] expectations between passenger rail as a mode of public transportation and our other public infrastructure such as roads and highways,” he said. “Let’s just clear the decks of that argument and hold passenger rail to the same standard that we would any other mode of transportation and make investments necessary to make it happen.”

Strohmaier said that people can support BSPRA’s efforts by contacting their federal representatives to encourage them to restore the North Coast Hiawatha route and advocate for the renewal of passenger rail across the rural West.

“We can join together … and say, ‘We, the region, value passenger rail and want to see the federal government step up and support rural America in a way that it has not in the past,’” Strohmaier said, adding, “You can look at a map of the United States and see the gross underservice of passenger rail in the western United States — particularly the northwestern United States. I want to remind folks in the administration and with Amtrak that people actually live here, and that rural America is not to be overlooked anymore.”

Strohmaier said that while the attention of counties tends to end at their political borders, passenger rail is a regional — and national — cause worth fighting for.

“What you lose sight of at times in simply focusing inward is that we have the ability to benefit our constituents within our jurisdiction — in this case in a profound way — by working together with other jurisdictions beyond ourselves,” he said. “This is the case with passenger rail … This will be a transformational, economically and socially, project for our region. The only way we’re going to have that very localized benefit is if we work across boundaries, across jurisdictions to make it happen.”