We’re back again to talk about the doohickey that I used to research and write this article! 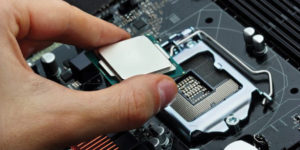 Last week we talked about what motherboards, power supplies, cooling systems and video cards do, and how they relate to the human body. Continuing on with that metaphor: If the motherboard is the spine, the power source is the stomach, the fans and water cooling are the vascular system, what’s the brain?

It’s actually three parts: The CPU, the hard drive and the RAM.

The CPU, or Central Processing Unit, is what executes commands and deciphers code so we can see a bunch of gibberish turn into Brenden’s stupid words on a page, or that cool Dyson Sphere we just made in our space game. It’s the main part of the brain that tells all of the other components what they should be doing, relayed through the Motherboard, just as our brain does with our spine. This is, in literal terms, the computer. It computes things. The rest of the unit is just auxiliary support so we can do other stuff and make sense of it all.

When you see CPUs, you generally see them with “GHz” or Gigahertz, which, in a nutshell, is essentially how fast the CPU runs. However, this is complicated when factoring in multiple cores. You might have a 4.0GHz CPU and your buddy has a 3.4GHz dual-core processor, and his is faster. This is because his processor executes one task per core (dual, being two) while yours executes one really fast.

When you hear people talking about “overclocking,” it’s a term for how many processes you’re making your CPU perform per second faster than the manufacturer’s recommended level. Gamers will push a CPU to its limits when you don’t want to miss a beat and end up staring at a respawn screen hearing some 13 year old with rich parents tell you to “git gud scrub.” This generates a ton of heat.

The next part of the brain is the hard drive. This holds all of the information we use and need, including the operating system, family photos or those six dozen custom game maps you gave up trying to edit in 2008. Hard drives come in two flavors: hard-drive disks (HDD) or solid-state drives (SSD).

An HDD works a lot like a vinyl record: It has a disk that spins and a spindle arm that reads and writes data. Because of this mechanical function, HDDs are considerably slower than their counterparts. Not a big deal if all you do is like dog photos on Instagram. Huge deal if you hate waiting for load screens in your favorite online game.

SSDs are like larger USB drives. They don’t have a moving mechanical part to read and write data and will transfer data considerably faster and be less prone to mechanical damage from moving around. These come in a few varieties: External USB drives, which are fairly slow but easily installed and transported. Internal SATA drives, which are fast, a little more pricey and not easily transportable, and M2 SSDs, which are lightning fast, expensive and mounted into the motherboard.

If you have a hatred for load screens matched only by your hatred for infernal demons that must be slain, an M2 is the way to go, as these puppies can read/write in excess of 1.6GB per second. That’s a little over an hour and a half of Youtube streaming data that can be transferred faster than you can say: “potato.”

To take some load off the hard drive (especially HDDs that have to physically change the disk’s surface to write data), your computer also comes equipped with RAM, or Random Access Memory. This stores some vital functions and frequently-used data that will load quickly and tends to come in GB values. Generally, 16GB of RAM is pretty awesome, and going over that is beating a dead horse, even for gamers. But hey, so is buying a Ferrari, so who am I to judge?

There are more components in your computer — things like a WiFi card with a built-in antenna to pick up wireless signals, USB ports that let a computer’s peripherals like keyboard and mouse hook in and, of course, an HDMI or a VGA port for a monitor so you can actually see what you’re doing with the computer.

Some computers (mine included) come equipped with fancy LED lighting that can change color with a controller, further augmented by having a tempered glass side panel so you can see inside while it’s running.

Those acronyms are probably just a losing hand of “Scrabble” to a lot of people, but as computers further push their way into our lives, they’re becoming more and more familiar terms to each and every one of us.

You can find all of these components in your own computer, or one of the 42 at the Sandpoint Library, or the 10 in the Clark Fork Library. I wouldn’t recommend cracking one of those open, though, unless you want the IT manager to go all Darth Vader and hurl you over a staircase.

Before my acronyms and I sign off, I wanted to give a thank you and a shoutout to Kyle from Candid Computers on Boyer. My family was in a twisted computer bind recently, and he hooked us up with a stellar gaming rig for a crazy good price. Thanks, man!