They’ve blown up aliens, they’ve shot out of other aliens’ eyes, they’ve been tied to shark’s frickin’ heads. Lasers!

Since their first application in 1960, lasers have helped the public for all sorts of things. We’ve used it for innumerable applications, not just melting stuff or making cool laser swords.

Believe it or not, laser is actually an acronym standing for Light Amplification by Stimulated Emission of Radiation, because laser sounds way cooler than labseor.

While we generally imagine a cool red beam of death or the dot your cat foolheartedly chases around, those are only a few basic lasers. Lasers can be focused to produce certain colors of light based on their wavelength, or no visible light at all such as is the case with ultraviolet lasers, infrared lasers or gamma-ray lasers. Trust me, you don’t want that last one pointed at you.

A laser beam is formed when light passes through a gain medium, which can be one of many things from certain crystals with precise chemical makeup that causes amplification and diffusion of light (making that cool glowy effect), glass or semiconductors with glass (a metal that has an electrical conductivity between metals like copper and things like glass.). Things like your cat toy use less expensive, less dangerous materials, while things like university particle lasers tend to use things you probably can’t buy at the store.

So what are some of the fun things we can do with lasers, other than blow stuff up?

Optical drives, namely for CDs, DVDs and Blu-Rays, use precisely-tuned lasers that are able to pick up microscopic deviations in the surface of a reflective disk, then relay that information to a computer that will decipher the data and create sound and/or a video image. If you’ve ever seen single or dual layer disks and wondered what this meant, this is when the laser can become more focused to read through the first semi-translucent layer of data and read into the second, allowing for more storage space. Interestingly enough, most standard computer hard drive disks, or HDDs, don’t use a laser, but use a spindle somewhat similar to a vinyl record player, if that record player were also capable of altering the data on the vinyl record. We’ll talk about computer components another day, if you’re curious. 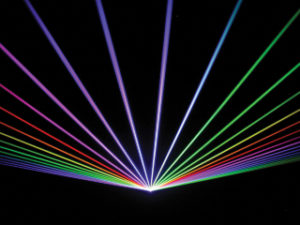 On the more destructive side of laser technology, the military has spent untold amounts of money trying to develop mounted laser weapons designed to debilitate aircraft and, more importantly, missiles without detonating the device, or detonating it in a controlled manner. Mounting these things on aircraft have proven to be a ludicrously difficult and expensive thing to do, but we’ve seen some success on stationary anti-air (AA) vehicles that can have motors that swivel and turn the laser, guided by a computer to make precise strikes. Look out, Empire! We’re coming for your Death Star!

We’ve also discovered that lasers can make for phenomenal cameras. Using a special laser, scientists developed a sort of camera that can track movement at speeds even flashy Hollywood slow-mo cameras balk at. While no one wants to watch Keanu Reeves move at 1 trillion frames per second, people do want to know more about the subatomic particles that make up our world and how they move, which often move so quickly that we need to use light (such as with a laser) to track their movements.

Speaking of subatomic particles, lasers are the primary way scientists are able to manipulate individual atoms to perform incredibly advanced experiments that could change the way we live as a species. These are called optical tweezers, and while taking minutes to move the individual atoms of a cinder block from point A to point B might seem as pointless as mailing individual LEGOs to your cousin to build a scale replica of the Empire State Building, it’s an important step towards our future. Within a couple of years of humans figuring out how to manipulate individual atoms on a massive scale, anything becomes possible. We’re talking robot bodies, painless prostheses, matter transference; yeah, trekkies, beam me up!

Working hand-in-hand with that exciting science news, we’re also using lasers in laboratories to create stars on Earth. You won’t find these stars taking any selfies on the ‘gram, because these are hydrogen factories like the beast swinging us around space like a tether ball. This is exciting because it is the start of fusion energy. As the sun has shown us, “free” energy has been flung at our Earth like Pontiacs from Oprah, and it’s been doing that for the past 4.6 billion years with relatively little complaint. Compared to energy sources like petroleum or other ethanol-based fuels that eject byproducts into the air with untold side effects, fusion energy makes heavier elements, up until iron. If you contain the fusion generator, those elements won’t be spilling out into the world while you use the heat from it to superheat water into pressurized steam to spin turbines, all with the help of lasers containing it all.

That’s all I have room for today, so the next time you’re teasing your cat, just imagine that you’re lassoing some hydrogen to build a brighter future for mankind.

Or keep tormenting that poor apex predator. He sits on your head while you’re asleep, anyway.