The night is dark and full of terrors, so my wizard casts the Level 2 spell: Darkvision! But wait, how does it work? 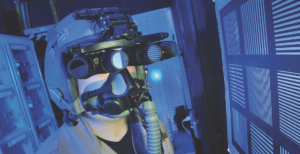 In the case of my wizard, magic is a convenient excuse — but Darkvision is an actual ability that everyone may possess today, from someone with a simple security camera to a hardened soldier fighting on the front lines.

The most important thing to know before reading ahead in this article is that light is always present — we just can’t see all of it. Our eyes have evolved to capture an extremely narrow band of light on the electromagnetic spectrum, conveniently named the “visible spectrum.” Shorter wavelengths, just out of our vision, are things like ultraviolet (UV), or in more extreme cases, X-rays and gamma radiation. Longer wavelengths we can’t see are things like infrared or radio waves.

While UV radiation is present at night, it’s not as abundant as infrared (IR) radiation. That’s because most infrared radiation comes from sources of heat, including our own bodies. That weird heat vision from Predator was like a basic version of what infrared imaging is — something that an interstellar apex predator would not have evolved with, or have augmented with considerably better technology to see its prey more clearly and not get fooled by wet mud.

Image enhancement is a fairly straightforward and simple technology, in theory. The device does what your eyes do, receives light — including UV and IR — then enhances it digitally to create an image that our eyes can detect. These images are colorless because of the low-light conditions, but we discern them in movies and TV as an ominous green color.

Human eyes decode information more effectively from colors. We’re better able to detect shapes, patterns and depth from looking at colors than static black-and-white images. As green is also at the center of our visible spectrum, it requires less work for our eyes and brains than something like violet or red. Plus, it looks awesome.

An important note on image enhancement: It is designed to be used in low-light situations, so using it in the daytime or having a flashlight shine into enhancement goggles is blinding. Some newer goggles are designed to mitigate this, but why are you going to use night-vision goggles during the day, anyway?

Many of the recent videos and movies you’ve seen through military goggles have likely been in black-and-white with high contrasts and sharp detail, where you can also see people’s shapes through walls right before an explosion renders the screen white. This is thermal imaging, and the technology is surprisingly simple.

These cameras are designed to pick up infrared radiation generated by passive heat in an area. In the case of humans, it’s the heat generated by our bodies, which is why particularly sensitive cameras can track peoples’ movements through walls. Using thermal imaging, soldiers can employ infrared lasers on their weapons to help guide their shots in the dark. These lasers are invisible to everyone who isn’t wearing goggles, allowing operatives to perform stealthy duties in the pitch dark with surgical precision.

There is one more type of night vision that I didn’t mention. If you’re thinking about breaking into some military research facility to get a glimpse at it, I can spare you the effort. Just head over to the Panhandle Animal Shelter and ask about the cats and dogs (and take one home while you’re there.)

Cats and dogs evolved as predatory animals. To achieve maximum efficiency as apex predators, they needed to be able to hunt at night when our soft and frail human ancestors were huddled together and sleeping. To be able to hunt at night, they needed a special adaptation to their eyes called the tapetum lucidum. The tapetum lucidum is effectively a mirror that reflects light outward from the eye in a focused beam to enhance the image that a cat or dog sees. This is why if you shine a light into a cat’s or dog’s eyes at night, they appear to glow. This is the tapetum reflecting the light back at you — and telling you to stop shining a light in your poor pet’s eyeballs.

Before you blame the tapetum lucidum for all of those terrible red-eye photos you took in the ’80s and ’90s, you should know that humans never evolved this special adaptation. As a bonus fact: The red eye effect in flash photography occurs because the time between the flash and the picture being taken is too brief for the iris to contract the pupil and protect it from the surge of light, so that red you’re seeing is actually the blood-rich retina along the back of your eye.

Gross, right? I guess I’ll see you next week.