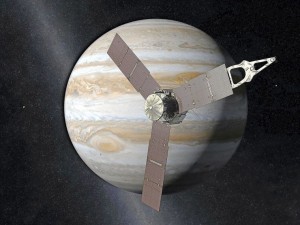 There are many cool things about Juno.

Over the Fourth of July weekend, you probably enjoyed a few brews and some good ol’ American beef alongside a show of fireworks. You also probably saw the internet and the news exploding with news about Juno, a fairly regular looking space-y satellite thing having something to do with Jupiter.

Everyone was making a really big deal about it, but it just looked like another normal satellite.

Juno wasn’t named after the movie. It was named after Jupiter’s wife in Roman mythology. Jupiter was a bit of a mischievous cheater and cloaked himself in clouds to conceal his wrongdoings. His wife, Juno, was able to peer through the clouds and see exactly what he was doing.

That’s what the spacecraft, Juno, intends to do with the planet Jupiter.

Why is that important?

It’s important because we only have theoretical knowledge about how gas giants work. We’ve never actually seen the inner workings of a gas giant before, even the ones in our own backyard.

Well, they like to conceal their mischief in clouds, and we haven’t been able to see through clouds. Until now.

Juno is equipped to pierce the veil using infrared and microwave instruments, but don’t count on trying to cook a burrito onboard the spacecraft—it’s not a microwave oven (though that would be pretty cool. Space burritos!). It will use these instruments throughout its several orbits to peek into the inner workings of our solar system’s largest planet. The reason that’s important is it tells us a lot about how Jupiter formed, which tells us even more about how the rest of our planets formed: Where we came from, where we are now and where we are headed, and similarly, what makes for other habitable (and uninhabitable) planets and their placement throughout the galaxy and beyond.

Gas giants are a pretty unique breed. Before we were able to look deep into space thanks to the Hubble Space Telescope, we figured every gas giant in every system could only form a set distance away from its host star and stay there. Why? Gas is light, rock is heavy, rock is pulled in greater and more concentrated quantities toward the Star, while gas hovers further out and stays there.

We thought this was the absolute truth until we found something called a Hot Jupiter.

Science, in its eternal quest to tell us that we’re wrong, showed how gas giants could exist within very close proximity to their host stars. We’re talking the distance from Earth to the Sun, which is really, really close.

Essentially, Juno is chasing the endless pursuit of science to illuminate new facts and answer old questions with new questions.

If you haven’t noticed by now, science is like a hydra. Cut one head (question) off, and two more replace it. Isn’t it great? At the very least, you’re never bored.

So what else is cool about Juno?

It has the largest solar array of any planetary probe ever created, which in itself is pretty cool, but missions to the outer solar system don’t normally use solar arrays (because the sun is so far away), they tend to use something called a Radioisotope Thermoelectric Generator (RTG), which is a generator that uses the heat generated from decaying radioactive material to create energy for the device.

And to think, 200 years ago we were still dying of frequent bacterial infections because washing your hands after shoveling cow poop for a few hours was considered a weird thing to do.

What else is cool about Juno?

It took a pretty unconventional path to Jupiter, traversing over 1.74 billion miles (or 18.7 times the distance from the Sun to Earth). This wasn’t a straight line, mind you. Nothing in space is ever in a straight line. Juno used the Earth’s gravity not once, but twice to slingshot itself towards Jupiter in a roundabout way.

How did it do that?

Once Juno was in orbit around Earth, NASA made sure that it did a series of orbital maneuvers, or burns, to alter its trajectory in orbit. Over time, at several key locations, this allowed it to build enough speed to leave Earth’s orbit and jettison into a solar orbit. As it whirled back towards Earth later on, NASA timed another burn that allowed it to use Earth’s gravity well to alter Juno’s course ever so slightly, and allow it to pick up speed, around an extra 8,800MPH. That’s fast. Really, really fast.

Sadly, Juno’s life will be a short one. The bulk of its life was spent getting to Jupiter, while the final 20 months will be used to study the gas giant. When its science mission comes to an end in 2018, NASA plans on sending Juno out gloriously, burning the last of its fuel reserves to send it careening into Jupiter’s atmosphere, where it will be inevitably crushed. Why end the mission in such a violent and awesome way?

Simply put, we don’t want to risk contaminating any of Jupiter’s moons, which may hold bacterial life, with bacteria from Earth stuck on or inside the spacecraft.

Just another day of NASA being awesome.