Mad About Science: ‘The Call of Cthulhu’

“The Call of Cthulhu” was a short story written by H.P. Lovecraft, published in February 1928. It’s about the narrator, Francis Wayland Thurston, following a trail of connected clues left by a deceased family member to discover the truth behind a mysterious cult that chants the incomprehensible phrase above. 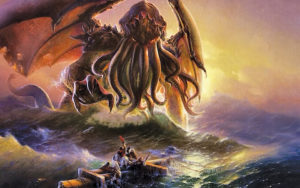 I won’t spoil the rest, but if you’re at all curious, there are a couple of compiled works of H.P. Lovecraft in the fiction section of the library under “Lovecraft.”

This short story, and Cthulhu in general, has made a pretty huge resurgence in pop culture in recent years. The image of Cthulhu is a giant humanoid figure with dragon-like wings and the tentacled head of an octopus. Cthulhu a malevolent being, and tends to drive people into committing insane and unimaginably evil acts. The city of R’lyeh is an underwater city that Cthulhu supposedly resides, which occasionally rises from the sea and creates all sorts of chaos and terror.

With the story’s return to the public eye, the cultural shifts we’ve made since 1928 have become blatantly apparent. H.P. Lovecraft was a troubled man. His writing is very poetic, but very wordy, and he was very openly racist (this unfortunately spills over into several of his stories, “The Rats In The Walls” being one of the more marked evidentiary examples). This, of course, has brought up the question as to whether the content of his character should impact our capacity to read and enjoy his work. That’s a tough question, and one I don’t plan on answering. What I can tell you is we can look at some of the scientific stuff that may have inspired parts of the story, and weird scientific happenings with roots in the story over recent years.

Cthulhu’s head is described to look like an octopus. Everyone knows what an octopus looks like now, though they were seen as truly alien creatures in the 1920s. Octopi are pretty weird, having eight limbs that can act independently from one another to complete tasks like prying itself out of a peanut butter jar (Seriously, watch the video, it’s creepy). Some octopi are even able to camouflage themselves and disappear into the sea rock. That’s pretty freaky.

During the events of the short story, there is mention of Haitian Vodou rituals, and like most other media, it is very demonized because it is not well understood outside of the South. It originates from West Africa, as many African slaves taken from French colonies were transported to Louisiana, Haiti and other areas of the Caribbean throughout the 1600s and 1700s. It’s always described as being a very primal and mysterious religion, but there is an incredible amount of information on the internet about it. It’s a strong cultural holdover that has defied targeted colonial suppression, it’s not just dolls and goat’s blood (assuming the latter is actually extremely insulting to practitioners that have deep cultural connections to Vodou.)

R’lyeh, the city that Cthulhu inhabits in the story, was believed to be somewhere in the south Pacific Ocean, at a space called the Pacific pole of inaccessibility, a point that is equally distant away from South America, Antarctica and Australia. In 1997, the National Oceanic and Atmospheric Administration (NOAA) recorded a long unusual sound around this location they dubbed “The Bloop”. The sound was so loud, it was detected by sensors up to 3,000 miles away. It was a sound that was too massive to have been made by any living creature. The true origins of the sound still remain a mystery, but the most likely culprit is calving ice from Antarctica, a sound we may soon hear much more of.

Spoilers: When the city of R’lyeh is finally revealed toward the end of the story, it’s described as having buildings using an architecture of “non-Euclidean geometry”. This is basically a fancy way of saying rounded buildings we would find rather alien. Euclidean geometry is all about points, edges and lines in a two-dimensional surface. Much of our architecture is built on these principles because of the downward pull of gravity, but we’ve also done some pretty crazy things with architecture. Islamic architecture in particular does a lot with non-Euclidean geometry, by highlighting rounded domes and lots of curvature in the stonework of mosques. Certain skyscrapers we’ve built recently even twist or spiral, which is hard to pull off on a sheet of paper.

No matter your stance on his personal life, Lovecraft made a pretty profound impact on our storytelling culture today. The idea of a cosmic horror, something so great and powerful beyond our ken, isn’t exactly new, but the means in which it was presented, where the good guy doesn’t always win, or the pure evil is overshadowed by the absurdity of our own hypocrisy in judging it to be evil was certainly ahead of its time. Much of his writing was done between World War I and World War II, when the world was seeing the very beginnings of globalization and a literal explosion of destructive technology. The world was changing faster than anyone could anticipate right before his eyes, and that must’ve been a scary prospect.

Lucky for us, we’ve all got cat videos to distract us from that.