As of July 1, breweries in Idaho are allowed to admit minors inside beer-tasting rooms as long as they are accompanied by a parent or legal guardian. 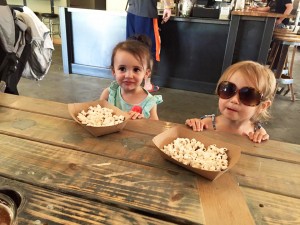 Beer for the big kids, popcorn for the small ones (left to right): Lily DeFord, 1 ½, and Lucy Thwaites, 2, kick back with some popcorn while their parents enjoy some microbrews at MickDuff’s Beer Hall. Photo by Kayle DeFord.

The change in state law came about this spring, when Sen. Shawn Keough (R-Sandpoint) and Rep. Sage Dixon (R-Ponderay) were contacted regarding the disparity between the legal definition of a winery and brewery.

“This issue was first brought to me about three years ago by local brewers who pointed out the inequity between brewery and winery tasting rooms,” said Keough.

Before the passage of House Bill H649, wineries were allowed to have minors on the premises with their parents or legal guardians. Breweries, on the other hand, were not.

“Rep. Dixon took an interest in the issue and took the work in the House and I assisted in the Senate,” said Keough.

Dixon said the bill took weeks of back and forth with winery and brewery lobbyists and Alcohol and Beverage Control (ABC) to ensure the language in the bill would suit everyone before it was introduced in the House.

“After passing the House, the Senate amended the language to stipulate what a ‘brewery’ was, and Sen. Keough carried it successfully on the Senate floor,” said Dixon.

Local brewer Duffy Mahoney of MickDuff’s Brewing Company was an integral part of introducing this bill to Rep. Dixon.

“A lot of our beers are actually considered wine,” said Mahoney. “We’re taxed as a wine. I figured, if we’re already taxed as a wine, why wouldn’t we have the same rights as them? I like to have the right to do things.”

Technically, beer containing more than 4 percent of alcohol by weight is taxed as “wine” in the state of Idaho. Mahoney estimates 90 percent of MickDuff’s beers are taxed like wine.

“We are not a bar, we’re a tasting room,” said Mahoney. “This is not a place for people to get drunk. We’re not selling shots.”

Mahoney said the law change will only affect a small portion of his customers; mainly the brewery tourism industry.

“We’ve already seen a lot of families coming in and buying merchandise, filling growlers,” said Mahoney. “Kids coming in with them hasn’t been an issue. A couple of local patrons have said they don’t like the idea of children coming in there, but the pros outweigh the cons.”

Brewery tourism has taken off in Idaho in recent years. There are multiple “Ale Trails” throughout the state that cater to people traveling to breweries in a given area. Participants check off each brewery their visit and, upon completing a “passport,” they can win prizes like glass growlers.

“It’s very difficult to explain to people that have driven from Montana or Washington that have minors with them that they are not allowed into our tasting room,” said Mahoney.

“We have a growing number of family-owned small breweries in Idaho,” said Keough. “We can see that in our own communities in Sandpoint and Bonners Ferry. … Visitors—families—seem to enjoy being able to take tours of both wineries and breweries, [and] learn about the craftsmanship that goes into making beer and wine.”

For Rep. Dixon, the law has the potential to help Idaho brewers grow their businesses: “Not only will this Law directly affect our breweries in District 1, it will help the Craft Brew industry throughout Idaho engage their patrons better, which should result in increased business growth. Many of Idaho’s breweries use ingredients grown in Idaho, which multiplies the economic benefit to the State, and many are vital local economies as well.”