“I want to be holding your hand when I go,” says Frankie to his former lover, Irene, in “Barking Water,” a poignant love story perfect for the upcoming Valentine’s Day weekend. Screened at the Sandpoint Library, it was the 2009 official selection at the Sundance Film Festival from Cherokee-Creek filmmaker, Sterlin Harjo. 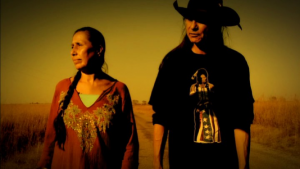 Saying goodbye one last time is never easy, but between two people who have been hurt by one another, and despite what the outside world sees, Frankie and Irene are still devoted to that love. Sometimes told in flashbacks, and at times with comedic irony, “Barking Water” takes us where the journey to forgiveness begins with a daring rescue and ultimately finds grace in the long road trip home.

Two free screenings of “Barking Water” will take place on Saturday, Feb. 11, at 12:30 and 3 p.m., in the Rude Girls Room of the Library’s Sandpoint Branch, 1407 Cedar Street in Sandpoint. Light refreshments will be served. Jane Fritz of the Idaho Mythweaver will lead an interactive discussion following both screenings of the film.

The next film in the free Native Heritage Film Series is “For the Generations: Native Story and Performance” to be screened twice on March 11. Six Native American performers infuse contemporary genres of dance and music with traditional elements from their Tribal heritage. After each monthly screening, a DVD copy of the film shown will be released into the Library’s circulation for public check-out.

This film series has been generously underwritten by TransEco Services along with grants from the Idaho Humanities Council — a state-based partner of the National Endowment for the Humanities — and the Bonner County Endowment Fund for Human Rights of the Idaho Community Foundation.