“The law in this area is clearly defined,” Idaho Attorney General Lawrence Wasden, a Republican, said in response to Wheeler’s letter. “I have no problems with providing a legal defense of the governor’s order and stand ready to do so should the need arise.” 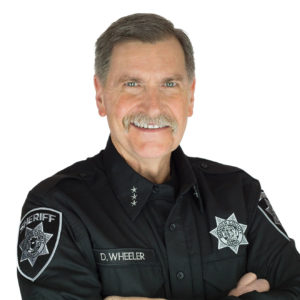 In a letter sent to Gov. Little April 2, Wheeler cited another letter making the rounds in social media from a Florida businessman named Alfie Oakes. Oakes’ letter claims the coronavirus has been blown out of proportion by media “fear-mongering” and that there was a fear of a “takeover of our great country by the Globalists (a.k.a. New World Order),” referring to a right-wing conspiracy theory which claims a secretive power elite is conspiring to rule the world through an authoritarian world government.

Oakes also questioned in his letter the reliability of the information disseminated by the World Health Organization.

“In the spirit of changing the course, I am urging you to call up the full Idaho Legislature and assemble them for an emergency meeting in Boise to discuss these points,” Wheeler wrote in his letter. “I do not believe that suspending the Constitution was wise, because Covid-19 is nothing like the Plague. We were misled by some Public Health Officials, and now it is time to reinstate our Constitution.”

Gov. Little’s stay-at-home order issued March 25 required citizens to self-isolate at home, not just if sick. It excludes healthcare, public safety and other essential workers as defined in the order.

Wheeler claimed incorrectly that the governor’s order violates the Constitution, and urged the governor to change his course.

“In the spirit of liberty and the Constitution, you can request those that are sick to stay home, but at the same time, you must release the rest of us to go with our normal business,” Wheeler wrote.

At the time of this writing, over 434,000 confirmed cases of the coronavirus have been reported nationwide, with over 14,700 deaths in the U.S. attributed to the disease. Idaho has reported 1,232 cases across 31 counties, attributing 18 deaths in the state to COVID-19. Bonner County reported its first case of the COVID-19 virus on March 29 and currently has three confirmed cases.

The Idaho Attorney General’s office offered an explanation on its website to show Little’s order is clearly defined in Idaho law.

“The Governor is the Commander of the Militia under Article IV, § 4 and Supreme Executive Power is vested within the Governor under Article IV, § 5 of the Idaho Constitution,” the AG wrote. “It is important to note that both the Director of the Department of Health and Welfare and local public health districts have authority to issue orders of quarantine and isolation.”

The Idaho AG’s office also pointed to a recent case brought before a court in New Hampshire where plaintiffs requested an “emergency and permanent injunction” on New Hampshire Governor Chris Sununu’s emergency declaration to render it “advisory rather than mandatory,” arguing that the governor “does not have the authority” to issue such an “unconstitutional” order.

The judge dismissed the lawsuit, claiming that the governor’s order was “enforceable, and it is constitutional.”

Wheeler’s call to assemble the full Idaho Legislative body during a worldwide health pandemic caused some to question the timing and reasoning behind his request. National news outlets such as The New York Times reported on Wheeler’s letter April 7, also mentioning a plan by Ammon Bundy – the man who led an armed takeover of a federal wildlife refuge in Oregon – to defy Gov. Little’s order and host a church service on Easter Sunday with a potential crowd of 1,000 people.

Of the over 1,000 comments on Wheeler’s Facebook post containing his letter to Gov. Little, some were in support of his reasoning but a majority voiced opposition.

Patrick Ream urged the sheriff to “… stop playing politics, abusing the platform of your office and worry about your daily duties. If you want to write this letter as a private citizen so be it. If there was concern about this being unconstitutional the Attorney General should be taking this up not you.”

Wheeler is currently running unopposed for his fourth term as Bonner County Sheriff.

“Calling the legislature into session at this time will only put the legislators and the state of Idaho at risk,” Bonner General Health Medical Chief of Staff Dr. Morgan Morton wrote. “…We strongly encourage the public to heed our advice to protect yourself, your family, and your community. … If we let down our guard prematurely, the sacrifices of the past two weeks will have been for naught.”

“We will continue to follow CDC guidance and guidance placed by our Governor,” Panhandle Health District public information officer Katherine Hoyer wrote to the Reader.

The Bonner County Board of Commissioners released a statement April 3 in response to Sheriff Wheeler’s letter, claiming that, “It’s imperative that we all have the freedom to express our thoughts and ideas and that expression is protected by the First Amendment to the Constitution. The Sheriff’s letter is the kind of suggestion that the Governor welcomes, just as he welcomes ideas and opinions from all citizens of Idaho. The Sheriff’s letter does not have the force of law and again, is strictly his opinion.”

McDonald concluded that “…the County will continue to follow the Governor’s order to the letter.”

Wheeler did not respond to requests for comments on his letter, but did speak to KREM-2 News in Spokane saying that Gov. Little’s order “punishes” people who aren’t sick.

“I want well people to be free to conduct their normal business and I want sick people to stay at home,” Wheeler told KREM-2. “Unfortunately, I think the governor has chosen to punish the well people.”

When KREM-2 noted to Wheeler that up to 25% of people infected with the COVID-19 virus may not show any symptoms and can unknowingly spread the disease to vulnerable people, Wheeler said, “Sure, well, the issue I have is I really believe that private businesses are voluntary associations as such and should be treated as such, and every private business needs to communicate with their own clientele and let them know the rules of their premises and that every individual can decide if they want to patronize that establishment or not.”

Wheeler is not the only elected official from North Idaho pushing back against Gov. Little’s stay-at-home order.

Rep. Heather Scott, R-Blanchard has also called Little’s order “unconstitutional, un-American and NOT the Idaho way” in a legislative update emailed to constituents. Scott urged Idahoans to “Stand firm on your God-given rights and exercise your authority as a citizen and push back on unconstitutional edicts that would control every aspect of your life.”

Rep. Scott did not respond to multiple requests for comment.

When asked if he would reconvene in Boise to debate the order, Rep. Sage Dixon, R-Ponderay said he would do what was necessary of him.

“I am willing to go back to Boise,” Dixon wrote to the Reader. “I also would expect that necessary precautions would be in place for our safety, and the safety of our constituents when we head back home.”

Dixon pointed out that he does “not question the guidelines given by the CDC and the Trump Administration.”

As local debate rages over Wheeler’s letter, a Facebook commenter who claimed to be a verdant supporter of the sheriff offered a fresh perspective on the matter.

“If everyone obeyed the Shelter in Place we would be getting thr[ough] this, but I think we are in for a very bad outcome,” Todd Liken-Savage wrote on Facebook, who said he voted for Wheeler and would do so again. “… Let’s all just agree to take care of our families and stay at home and get through this quickly. Left or Right or Libertarian, we are all in this together, let’s act that way.”

*This story is updated from its previous version filed April 3, 2020.