It’s all led up to this. One small print for a man, one giant block of text for Bonner County!

In last week’s Mad About Science article, we discussed some of the challenges associated with traveling to Mars. Now, we will explore ways in which we could colonize the red planet.

As you already know, Mars has a very thin atmosphere, which leads to a problem with retaining heat and deflecting radiation. This would prove problematic for our first Martian settlers, as it would mean they would need to be very careful when dealing with oxygen and carbon dioxide. Humans breathe in oxygen and exhale carbon dioxide as waste. The carbon dioxide waste is then utilized by plants on Earth and converted back into oxygen via photosynthesis, thus using the carbon as building blocks to help grow more of the plant. 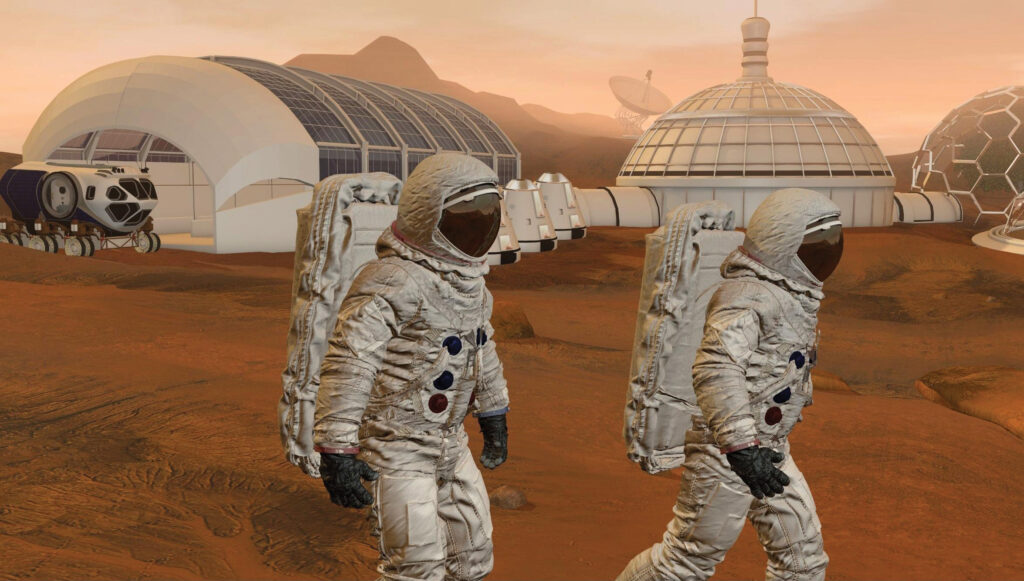 Mars doesn’t have any plants, and its fluctuating temperature and lack of circulating oxygen makes it impossible for plants to grow there without shelter.

Humans would need to build habitat structures, likely out of polymers and other plastics. These habitats would accomplish two primary goals: to trap heat and to trap gas.

Here on Earth, we already have structures for growing plants in otherwise inhospitable conditions. A greenhouse is a very basic form of structure that would be used to great effect on the Martian surface, but as greenhouse owners know, heating a structure in sub-zero temperatures becomes difficult. That difficulty is compounded when the nearest cord of wood for your stove is more than 200 million miles away.

Martian heating would be a challenge, but not impossible. Colonists would be able to utilize three primary methods for heating: electrical, body heat and compost. Due to a lack of resources, solar and mechanical energy production are the most viable to use. Colonists would be able to use a mix of solar panels and manual turbines to generate electricity — imagine an exercise bike or the crank of an old-school ox-driven mill. Manual conversion would require increased calorie intake from the colonists, which would make them burn through food more quickly, but it would also generate body heat while keeping the colonists in good health. Of course, this becomes a moot point if we were to discover hydrocarbons, similar to propane or other natural gasses, on Mars.

A practice we employ on Earth is to fill multiple black plastic barrels with water and stack them inside of a greenhouse. The solar energy from the sun is absorbed by the dark paint, which heats the water acting as a thermal battery. This could also be employed on Mars, provided the water wasn’t allowed an avenue to escape and evaporate to be lost forever. Additionally, that water would have to have been carted from Earth or harvested from the Martian poles as ice.

Compost heat would fulfill two major roles: heating the ambient area while also recycling nutrients to feed to the plants that act as both a carbon filter and a source of sustenance. Sorry, folks, but if you have to be within 50 feet of a flush toilet while camping, you won’t want to sign up for a trip to Mars. The first few colonies will likely be heated and sustained largely by humanure.

Once we’ve developed some dome cities on the planet’s surface, what comes next? Would we be able to terraform the planet and alter the climate like we’re doing on Earth?

NASA surveyed Mars and did some big calculations to figure out whether or not we could pump enough carbon dioxide into the atmosphere to create an artificial planet-wide greenhouse effect like we’re doing on Earth. Warming Mars would be beneficial for us, unlike on Earth.

Unfortunately, there aren’t enough resources on the planet to terraform it in a way that could benefit humans, at least not with our current technology. This would require an immense amount of supplies to be transported from Earth or another planet — preferably Venus, which has a thick atmosphere. This in turn would expend even more resources to transport.

An alternative to space trucking resources from Earth would be to set up a mobile manufacturing center that roams through the asteroid belt between Mars and Jupiter. In theory, this roaming factory would be able to harvest some asteroids for materials to create things like rockets that would push larger asteroids out of the belt, and into a collision-course with Mars. If enough of them were to impact the planet’s surface, we could theoretically re-populate the atmosphere with carbon, oxygen, nitrogen and other gasses. This is well beyond our level of technology at this point, but it seems more viable than hauling gas from Venus or Earth.

However, if we’ve mastered absolute recycling, there wouldn’t be a need to terraform the planet. In fact, it would make more sense to just build greenhouses in space that orbit the sun. Imagine your own self-contained 40 acres, where your nearest neighbor is 100,000 miles away. This was explored in the theoretical O’Neill cylinder from 1976. Essentially, it’s a miniature Earth in a tube that spins to simulate the effects of gravity with centrifugal force.

Mars and O’Neill cylinders would certainly solve the housing crisis; though with an estimated cost ranging from $800 billion to $10 trillion per cylinder, something tells me City Council wouldn’t approve a vote on that any time soon.

Prove me wrong, and stay curious, 7B.