In the heart of an inescapable and brutal winter, a faint glimmer of hope rings out amid the rime-encrusted bramble — faint, but unmistakable. Your heart flutters, your spirit lifts and you know beyond any doubt that spring is coming. That one, lovely little harbinger, singing its pulchritudinous symphony: 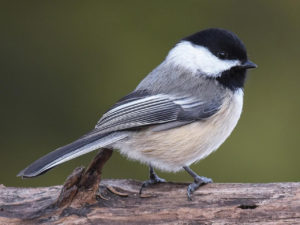 Idaho is home to no fewer than four species of chickadee. I’ve personally seen two fluttering around the gnarled winter branches outside my home: the mountain chickadee and the black-capped chickadee. I was curious about these hardy hooligans when my wife went to start her car one morning and shouted, “These stupid birds sound like Negan from The Walking Dead! That’s scary!”

To which I replied with a satisfied sigh: “Spring has arrived.” Well, at least it’s out there somewhere on the seasonal horizon.

The call to which I’m referring is called the “fee-bee” call in chickadee-speak. Sometimes it’s been called “cheeseburger” and, more aptly, “Hey, sweetie”. It’s essentially a chickadee cat call, with which the alpha males of a flock try to attract a female as spring approaches. It’s a complicated call loaded with nuance, as all chickadee calls are. Part of the call is to attract females, but it’s also a way of marking territory and trying to warn off other would-be alphas. Each call is unique to the individual that makes it, like a fingerprint. While I can’t tell the difference between two bird-bros flexing on each other, the difference to the chickadees is like listening to Ed Sheeran and Ozzy Osbourne having a rap battle.

Another unique call is the one for which the bird is named: the “chick-a-dee” call. This is a complicated call that acts as a form of remote check-in, like military patrols over a radio. It’s fairly commonplace for most birds, most noticeable in domesticated ducks that are constantly quacking at one another. Unique to chickadees is the modification they make to the call in the presence of predators. Chickadees will multiply the buzzing final “dee” syllable in their call numerous times to alert the flock of a nearby threat. The more “dee” sounds you hear at the end of a call, the more active and dangerous the predator. This can be a good indicator for a backyard farmer like myself to be on the lookout for hawks, though it’s also possible the chickadees are calling because of you.

The chickadee predator call is so nuanced that people have observed the flock being able to report size, location and danger level of a particular predator against others using just those three unique syllables. Try telling your friends a specific UFC fighter is about to put the smackdown on you while only using three syllables — it isn’t easy.

Chickadees are non-migratory, meaning they are one of the few birds in our area that stick around during the winter — one of the reasons we see so many this time of year.

As anyone with a down comforter knows, feathers do an incredible job of insulating heat. Most birds can trap the heat their bodies naturally generate from eating food and being generally active by controlling how much air flows through their feathers. If you watch closely, you can see chickadees making the feathers on their head rise and fall, which serves as equal parts showiness and thermal control.

Another cool trick they have is lowering their internal body temperature overnight by up to 15 degrees, which can slow their metabolism when food is at its most difficult to find.

Like all birds, chickadees lay eggs. A behavior humans may find odd is that chickadees don’t always like the first home they land in, and will drop a test egg into a shelter to see if they bond with the home. If they don’t, they move on and abandon the egg. While this might seem appalling to humans, most birds are capable of laying several eggs and rearing multiple young in one season, whereas humans need to devote nine months just to gestation and decades rearing their young. If humans regularly produced litters of children, I can guarantee that everything about our civilization would be entirely different.

Chickadees are some of the bravest birds in the presence of humans. Surprisingly intelligent for possessing such small brains, they seem fully aware that humans aren’t able to catch them or harm them without some kind of tool. They’ll gleefully invade our yards and pillage our window feeders during the winter, when it’s most difficult for them to find food. If you fancy yourself a hobbyist woodworker and a bird nerd like myself, your local library has a great book with a ton of ideas for nesting boxes and other animal houses: How To Build Animal Housing: 60 Plans for Coops, Hutches, Barns, Sheds, Pens, Next Boxes, Feeders, Stanchions and Much More, by Carol Ekarius. You can put it on hold from home from the digital catalog or ask about it at any of the desks.

If you’re curious about some of the varied calls made by our local chickadees, the librarians can help with that, too. Just don’t ask them to make the calls themselves — another staff member might have to shush them.