I was standing in line at the grocery store the other day and heard a woman say, “I just don’t ever remember a winter being this bad in North Idaho.”

She was somewhere north of middle aged, wore a trendy raincoat, leggings and boots made more for fashion than function. The flannel-shirted man behind me scoffed and shook his head, raising his eyebrows and rolling his eyes when I looked back at him.

I couldn’t have said it better myself. 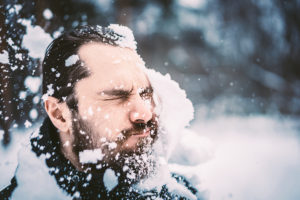 If you were to listen to the water cooler banter and conversations in line at the store, you’d think North Idaho had just experienced winter armageddon instead of a few days of snow. The truth is, I can remember a winter “that bad.” I can remember half a dozen of them, in fact, including the famed 1996-97 winter that people will still be talking about in Sandpoint until the Earth’s magnetic poles reverse.

These were real winters, with endless blizzards, roofs collapsing all over town, school canceled for weeks, not days. These were winters when you’d be a fool to drive anywhere without a plow, a chainsaw, a flare gun and your ski pass.

Passersby would hobble on the downtown sidewalks with legs about to give out from weeks of powder skiing. Bars were cozy hamlets of debauchery where patrons felt safe having that extra drink, because nobody was even thinking of driving home in the blizzard.

Families cozied up at home by roaring fires, mornings were filled with people climbing ladders and heaving metric tons of snow off of their rooftops — much to the delight of local chiropractors. It was hard work, but rewarding at the end of the day when all the snow had been dealt with.

Now, it seems every time a strong wind blows or it snows for a day it’s cause for endless ranting and whining from the less-hardy citizens that call North Idaho home. I’m talking about the people who complain about the heat in summer, the raking of leaves in fall, the snow removal in winter, the damned jovial attitudes of people in spring. These wet blanket weather sissies make me wonder: Why in the hell do they live in North Idaho if they can’t handle a little snow?

It seems we’re all due for a primer on how to winter in North Idaho.

First and foremost, if you can’t handle the snow, you may want to look into a new place to call home for the winter, because this is North Idaho. It snows in North Idaho — sometimes a lot. Snowbirds often head to Arizona or other points south to seek out vitamin D during the winter months. Others plan their vacations to coincide with the dreary cold-weather season. If you live in Florida, you’ll have to deal with a hurricane from time to time. If you live in North Idaho, you’d better believe it’s going to snow.

Next, if you live in town, observe a couple of rules of etiquette during winter. On snowy nights, park your car on the even-numbered side of the streets (usually the west side of north-south streets and the north side of east-west streets) so the plows can remove it. There seems to be “that guy” on every block that refuses to move their vehicle when it dumps, resulting in the rest of the block having to trudge over snow berms to get to their homes. Don’t be “that guy.”

Third, for those who live in the country, we know the roads are bad in some spots. Potholes have been known to swallow full-sized trucks whole, leaving only lewd mudflaps floating behind. However, chances are nobody forced you at gunpoint to live in the country. Chances are you probably enjoy the solitude of living away from town. When I was a kid, we lived near Westmond and had to wake up early just to plow a route from the front door to the bus stop. Yes, we complained, but I was young and do you think my parents cared? Nope. They just handed over the shovel and said, “Get to work.” Granted, folks who live in the country complain about the snow less than townies, but I still hear it and it’s still as ridiculous as when I did it.

In conclusion, channel that ill will toward the weather into your shovel and get some exercise. Snow will fall, rain will fall on top of it, mud will flow and your new car will get dirty. You will step in a puddle that soaks your pant leg. You will watch as the driver in front of you doesn’t stop in time for the intersection and slides right through it. These things happen. Learn to deal with it or start making plans to move elsewhere, because it ain’t gonna stop.

In all seriousness, if you are a senior or need help finding snow removal services, consider calling Sandpoint Community Resource Center at 208-920-1840 from 10 a.m.-2 p.m. Monday through Friday to learn about volunteer programs.