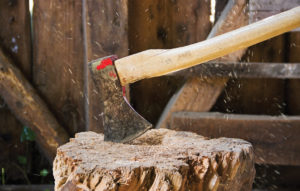 I’m sure some sharp-eyed reader is going to call me out on having done an article on axes before. Have I? That’s okay. I’m not just going to copy-paste what I’d written before, because we’re learning new stuff all of the time! (Seriously, did I just dream that I’d written one on axes??)

Axes are one of the oldest tools in our arsenal. Their original form was called the hand axe, and it was very different than it is today. It was essentially a stone wedge that was sharpened and used your arm as the handle. Imagine chopping those four cords of wood like that. Heck, imagine GETTING those four cords of wood like that! It took over 1.5 million years for someone to figure out putting a handle on it increased your leverage and mechanical advantage, and didn’t hurt your palm so much to use. The first handled axes started appearing around 6,000BC, or 8,000 years ago.

The axe truly started to evolve with the help of metallurgy. For the first several hundred years, they were still just pointed wedges. A lot like if you put a garden trowel at the end of a stick and swung it. But over time, metalsmiths and axe-wielders alike figured out that widening the surface area meant you could deal more damage to an object, and for longer periods of time without need for repair.

Because of the tool’s usefulness and ease to craft in relation to something like, say, a sword or a suit of armor, axes have seen tremendous use in Neolithic and pagan rituals. People would offer up loads of finished axes to their gods for unknown reasons, as we’ve found tons of them with no use from as long as 15,000 years ago. Perhaps people were saying, “These helped us out a lot, you should have them in the aether.” I know that’s everyone’s mentality during the Super Bowl when people sacrifice their 60-inch plasma screen to the losing team at the end of the game.

If you recall from the Vikings article, axes have also had a prominent role in warfare. I mean, if it cuts a tree, it can cut a person, so why not? The axe’s prominence in early warfare stems from its simplicity to reproduce. You use a relatively small amount of metal and expendable wood to make a danger stick even an idiot knows how to use. They were lightweight enough that you could throw them and create all sorts of horrific damage, and sturdy enough that you could pull it out of your target without unnecessary effort. While spears have a much more prominent role in warfare for the same efficient reasons, axes have the distinct advantage of waging psychological warfare. Getting murdered is never fun, but let’s be honest: getting impaled isn’t nearly as terrifying as getting axed. Why do you think they call it that when you get fired? It’s scary!

That phrase originates from another garish use axes have had in Europe: executions. When making a downward swing with a heavy axe, gravity gives a loving pull and adds to the speed and force of the cut, which just so happens to increase the likelihood that the executioner will relieve the condemned of their head in one stroke. The actuality of single-stroke beheadings was really pretty rare, especially in rural communities that sought to execute the king’s justice, but lacked experience executioners. The axe could only take someone so far, the rest was on the skill, accuracy and confidence of the wielder.

Working axes are flat on one side. Really good ones are also weighted there, too. The reason for this is because the wedge will only go so far, as anyone that’s ever cut pine logs knows. When your wedge or your axe gets stuck in fibrous wood, having a double-sided blade won’t do you any favors. Instead, you can use a hammer or another axe to bang on the flat part and add more mechanical pressure and reverberation to split the wood the rest of the way. Carpenter’s axes are good for that, but they’re also good for if you’re building something and need to quickly switch between cutting a piece of wood and hammering a nail without carrying a bunch of extra tools on your belt.

A firefighter’s axe is designed similarly, though it has a point on one side. This is used for delivering precise, concentrated force to something like a metal sheet or anything else that may be indistinguishably on fire and in the way, then prying it away.  I’m sure any of our local firefighters reading would love to tell you more about all of the cool tools they carry, especially since our firefighters are equipped differently from firefighters somewhere like New York.

While it’s logical to think that chainsaws have replaced axes, this is hardly true. Chainsaws have done a good job at replacing saws, but not axes. You’d wear out a chainsaw trying to break down a cord of wood, not to mention probably blow out your shoulder. I just wanted to include that the first chainsaw-like device was developed in 1830, which I think is incredible. (It was designed for dentistry.)

All right, break time is up, get back to choppin’!