The long-awaited moment is finally here.

City and business officials are excited to introduce the first-ever public demonstration of Solar Roadways panels this Friday. Given the immense public interest surrounding the technology since its viral crowdfunding campaign, the event is expected to place significant media attention on Sandpoint. 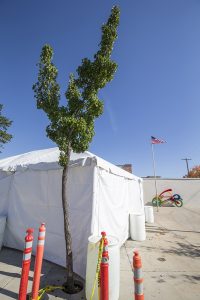 “The weather report said it should be a good day for us to be outside, and we’re supposed to have some sun,” Sandpoint City Administrator Jennifer Stapleton told council members last week.

The day kicks off with a 1 p.m. press conference at the Columbia Bank Building, located at 414 Church Street. Following the media frenzy, an official ceremony will begin 3 p.m. at Jeff Jones Town Square, where the demonstration project is located.

At 150 square feet in size, the demonstration boasts many of the Solar Roadways panels’ envisioned features. Snow and ice should be no problem on the panels this winter thanks to heating elements, while the solar energy collected throughout the day will help power the square’s fountain and bathrooms. What’s more, kids and families should have plenty of fun playing with the panels’ programmed sequences of LED lights, which are intended to paint road lines when used as a driving surface.

A proof of concept for Solar Roadways technology, the project is a first step toward large-scale, multi-functional walking and biking surfaces. According to Solar Roadways officials, similar demonstrations are expected to open in other areas of the country.

The project is funded primarily through an Idaho GEM grant from the Idaho Department of Commerce and a grant from the Sandpoint Urban Renewal Agency.