Ever since Pokemon GO! came out, you’ve probably come to love your phone’s GPS. It helps you find that Pikachu you’ve spent the past hours crawling through your neighbor’s topiary trying to catch. Have you ever wondered how it worked? Or what it was?

GPS stands for Global Positioning System, and it does exactly what you think it does: It tells you where in the world you are. How does it figure that out? 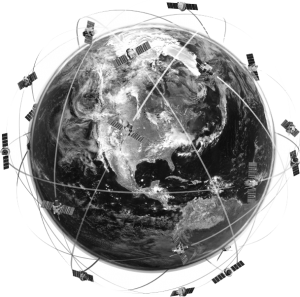 In 1973, the Department of Defense got tired of using maps and trying to give directions to different military craft at different points on the planet while trying not to get confused, themselves. They decided that it would be a good idea to shoot a whole bunch of satellites into orbit that would help tell our boys where they were and where they should be going. Initially, the project used 24 satellites in 1995. I make this sound like it shouldn’t have taken 22 years, but it was an enormous endeavor. Each of these satellites had to be positioned in geosynchronous orbit (that means they had to “stay put” without falling out of the sky.) during a time when spaceflight technology was still relatively new and—as you guessed it—not guided exclusively by satellites.

In case you were wondering, the number of GPS satellites currently in orbit is 31, and to triangulate an accurate position, at least 4 must be within line-of-sight of one another and you.

But Brenden, if this was a DoD project, why can I use it on my phone? Wouldn’t they keep something like that to themselves?

Probably, I’m sure that came up at a meeting at one point. It seems that the incredible boons to global economies that are able to use GPS systems freely outweighed the “let’s keep this to ourselves and hold it over our subjects’ heads” trait that is so often attributed to our governing bodies.

It has been proven that sharing is caring, as GPS is a pivotal tool for more than just catching that Magikarp you didn’t want, but for being able to coordinate entire fleets of planes near-simultaneously, avenues for cargo ships and navigationally challenged hikers around the world.

So how does data from a satellite get onto your phone? Does that mean I have a SAT-phone?!

No, it doesn’t. You wouldn’t have to ask if you had a SAT-phone.

Whenever you are connected to the network, whether it’s through WiFi to use the internet, or the mobile network that’s available almost everywhere, the GPS network is connected to that, feeding data from the satellite, to the network, then to your phone. Your provider has the capability to talk with the satellite, then they telephone it to you. A literal telephone game.

But Brenden, it happens so fast! It knows where I am immediately!

That’s the idea. When your phone sends a request to the satellite through the network, it takes only a fraction of a fraction of a second to go from your phone, to the cell tower, to the provider’s hub, to the satellites, back to the hub, back to the tower, back to your phone. That’d be a long trip for us, but these things are moving damn near the speed of light, faster than our brains can process what is actually going on- Hell, faster than our eyes can even perceive that there is any sort of a delay.

If it does take a while, that has more to do with your lack of service than the satellites’ ability to communicate.

When science and engineering come together, some pretty amazing things happen.