The strange story of David Hahn

It’s not often that I write an article about a single person — so when I do, you can bet that person must have lived through some pretty crazy stuff.

David Hahn certainly did, but for all of the wrong reasons. 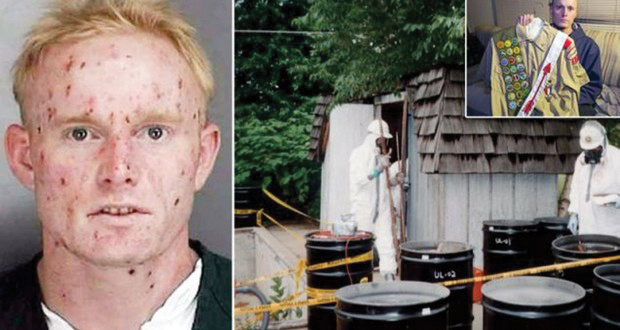 David Hahn, left, and the scene of his radioactive tinkering. Courtesy photos.

Born in 1976 in Royal Oak, Mich., David Hahn had an early aptitude for chemistry after a family member gifted him with a home chemistry set. Even today’s fireworks are considered safer than these old chemistry sets, as was evidenced when Hahn nearly burned down his tent and camp site during an Eagle Scout retreat where he and a number of his friends started a magnesium fire while trying to make their own fireworks.

Magnesium reacts to water by breaking it down into an extremely flammable hydrogen gas, thus making the fire more dangerous. Additionally, attempting to use a traditional carbon-dioxide fire extinguisher will intensify the reaction. The most common methods are to use a specialized D-class dry chemical extinguisher or to quench the fire in sand, neither of which the group of Eagle Scouts likely had in the middle of a retreat.

You might be surprised to discover that this mishap didn’t get David kicked out of the Eagle Scouts, and in fact he was encouraged to keep experimenting — even being awarded a badge for Atomic Energy some time later, for reasons you will soon discover.

Despite frequently igniting small explosions and spilling untold amounts of chemicals all over the floor in his bedroom, his parents refused to halt his experimentation, or even supervise him — instead, they moved him into the family’s basement where it was suspected he would do less damage to himself and the people around him.

This proved to be a critical error in judgment.

Now, don’t get me wrong — David Hahn was a very smart kid, and had he been given the proper guidance and oversight, could have had a bright future as a chemist or nuclear researcher; but, as far as anyone can tell, he was just left to his own devices, which was a recipe for disaster.

Hahn’s experiments were moved a second time when he accidentally ignited a glass container filled with red phosphorus (presumably scraped from the end of an unknown number of matches). The resulting explosion sent shards of glass traveling at hundreds of miles per hour into his hands, arms, face and eyes. Somehow he was not blinded, his interest in volatile chemicals didn’t cease and, most confusingly, his parents still didn’t stop or supervise what he was doing. Instead, David set up shop in his mother’s backyard potting shed.

It was in this potting shed that Hahn decided he wanted to build a functional nuclear breeder reactor — this is a type of nuclear fission reactor where neutrons are introduced to radioactive isotopes to create volatile forms of uranium that go on to split in two, creating a cascading effect of energy release that generally ends in an explosion — such as the one that blew the roof off the No. 4 reactor at Chernobyl. However, when these reactors are monitored and balanced properly by trained professionals, the energy generated can prove to be quite efficient in boiling water, turning turbines and creating electricity for us to use.

There’s a reason most governments and energy companies don’t build their reactors out of potting sheds.

Hahn managed to procure a shockingly large amount of radioactive metals to successfully build the first stage of a breeder reactor, called a neutron source. He obtained the knowledge of how to build these reactors by simply calling and writing to organizations like the Nuclear Regulatory Commission, the American Nuclear Society and others while pretending to be an adult researching the topic. David then procured a number of radioactive metals from hundreds of smoke detectors, camping lanterns and antique clocks.

He encased his neutron source in a block of lead with the center bored out of it, tin-foil wrapped cubes of thorium ash collected from the camping lanterns and even some uranium he procured from Ukraine after a simple phone call.

By this point, he has essentially created a radioactive fire hydrant that was so dangerous that he was able to detect large amounts of radiation from a block away. It was at this point, Hahn decided he had to disassemble the reactor before it could cause any more harm.

Unfortunately for Hahn, the local police happened to stumble upon him trying to dispose of the pieces, and soon the FBI got involved. You might imagine a storm of hazmat-wearing movie villains descending on the property in the blink of an eye, and you’d be right — if that eye took five months to blink. An ocean of regulatory mishaps and bureaucratic red tape left federal agencies passing the buck back and forth until the EPA finally stepped in five months after Hahn’s initial arrest to begin cleaning up the area.

In that span of time, his mother — afraid of losing her property — had attempted to dispose of most of the material herself. Much of this proto-reactor ended up in an unknown number of landfills and could still be creating radioactive waste to this day.

Don’t get me wrong, it’s not my intention to disparage Hahn’s scientific curiosity, or the curiosity of any readers out there, but if you plan on trying to build a highly dangerous nuclear reactor in your backyard, maybe you should soundboard it off a friend, first. Trust me, your neighbors will thank you for it.