Last year was historic for women across the country, sweeping 54 female candidates to Congress and placing an unprecedented emphasis on women’s issues. 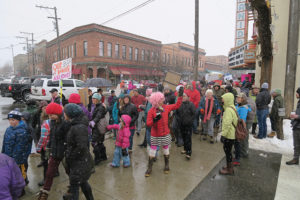 The inaugural North Idaho Women’s March took off from the Panida Theater and wound around the Sandpoint City Beach. Photo by Ben Olson.

It was also an important year for the Sandpoint Women’s March, which kicked off in 2017 with other Women’s Marches across the country, including the Washington, D.C., march that drew between 500,000 and 1 million attendees. Nationwide, around 4.2 million people marched in protests around the country, making it the largest single-day protest in U.S. history. Turnout was similarly impressive in Sandpoint, bringing 700 people downtown. The next year was even more successful with an estimated 1,000 people in attendance. Each year carried a specific theme reflecting the tone of the moment, and according to Sandpoint Women’s March planner Rebecca Holland, this year is no different.

“The first year we marched, then we ran, and now this year, our theme is that we insist,” she said.

This year, the Women’s March retains its mission to promote social and economic justice while serving to “celebrate diversity and promote a future of equality, justice and compassion for all.”

Like previous years, the march will begin with a rally, which will be held Saturday, Jan. 19, this year at noon in the Sandpoint Middle School gym, with doors opening at 11 a.m. The rally will include speeches by several speakers, with the keynote speech coming from the 1999 Sandpoint High School valedictorian, Dr. Ryanne Pilgeram. Now an associate professor of anthropology and sociology at the University of Idaho, Pilgeram will discuss the resurgence of hate groups and intolerance and its impact on local communities.

Joining Pilgeram in the speaker lineup is Rebecca Cleveland-Schroeder, a health care advocate and former candidate for office based in Coeur d’Alene, who will discuss the ballot success of Medicaid expansion and what the future holds for Idaho health care. Cedar Post editor and SHS senior Corinne Capodagli will also discuss women’s rights and progress as seen by her generation.

Following the speeches comes the centerpiece of the day: the march. It will follow a 1.5-mile route from the gym and through Sandpoint. Always a lively event, the march’s long line of participants usually carry signs or instruments to create a cheerful atmosphere.

While at the rally, attendees can check out action tables staffed by members of various community groups. Organizers ask that marchers wear soft-soled shoes to protect the gym floor and encourage them to bring along signs or rhythm instruments to liven up the afternoon. Since the nearest comparable march is in Spokane, all North Idaho residents from Coeur d’Alene to Bonners Ferry and beyond are welcome, as are both men and women.

“Of course, we welcome our like-minded brothers to join us,” said Holland. “We all need to broaden our awareness and advocate for progressive policies that will make our democracy work for all our citizens.”

More than anything, however, Holland encourages participants to bring positive, cheerful attitudes as planners and speakers detail how the 2018 “year of the woman” can become something even greater in 2019.