A public input session hosted July 23 by the Lake Pend Oreille School District Board of Trustees threw surprisingly few sparks — especially given the amount of heat typically generated by its subject. 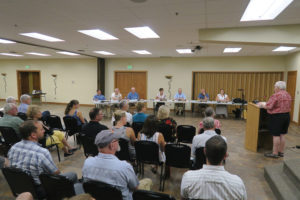 About 50 area residents turned out July 23 to have their say on whether a permanent school levy sshould be on the November Ballot. Photo by Zach Hagadone.

LPOSD officials are contemplating whether to put a measure on the November ballot asking voters if they think the $25.4 million supplemental levy passed in March ought to be made permanent.

In the past, even the hint of a school levy has spurred passionate public debate. Yet, of the approximately 20 attendees who spoke at the event, which took place at the Ponderay Events Center, opinion was evenly split between those against and in favor of making the levy permanent.

For Danielle Ahrens, a former District 1 legislative candidate, making the levy permanent would “take the taxpayers’ voice away.”

“We’re not going to give carte blanche to any agency or any group to do that mandatorily across the board,” she said.

Speaking in favor of the ballot measure, Sandpoint resident Mindy Cameron said that while levy votes stir up controversy, they tend to pass by comfortable margins.

“They are never squeakers,” she said. “I think that says to this board that you have a good reservoir of support in this community.”

Wendy Dunn, of Sandpoint, said “not securing the levy is an irresponsible decision” and added that LPOSD may realize savings from not having to repeatedly bring the issue to the polls.

“What’s the cost of running a levy every two years?” she asked. “Those costs would be essentially erased if this levy was permanent.”

Some speakers told trustees that they were more comfortable being given the choice to vote on funding every two years, while others wanted assurances from the board that it wouldn’t come back with additional increases for eight to 10 years should the current levy be made permanent.

LPOSD Board Chairman Cary Kelly was pleased with the turnout and grateful to hear from all sides of the issue.

“We just want to know what people think,” he said, stressing that it’s not for the board to decide whether the levy is made permanent — only if the choice should be put on the ballot. “We think it’s a good enough idea to put it before the voters.”