Last year, when Sandpoint held its first ever Pride Festival, Lucinda Meshberg was headed into her senior year of high school. She said she was “blown away by the warmth and love at the event.”

“I hadn’t thought that anything like that could happen in Sandpoint, and seeing that supportive environment made me much more optimistic about the future for LGBT+ youth in this town,” she told the Reader.

As a member of Sandpoint High School’s Human Rights Club (a youth faction of the Bonner County Human Task Force), Meshberg has been part of an effort to create “a place where a lot of kids can feel safe to be themselves.” While the club is not geared specifically to LBGTQ people, Meshberg said that many who consider themselves a part of that community “gravitate toward the club.” 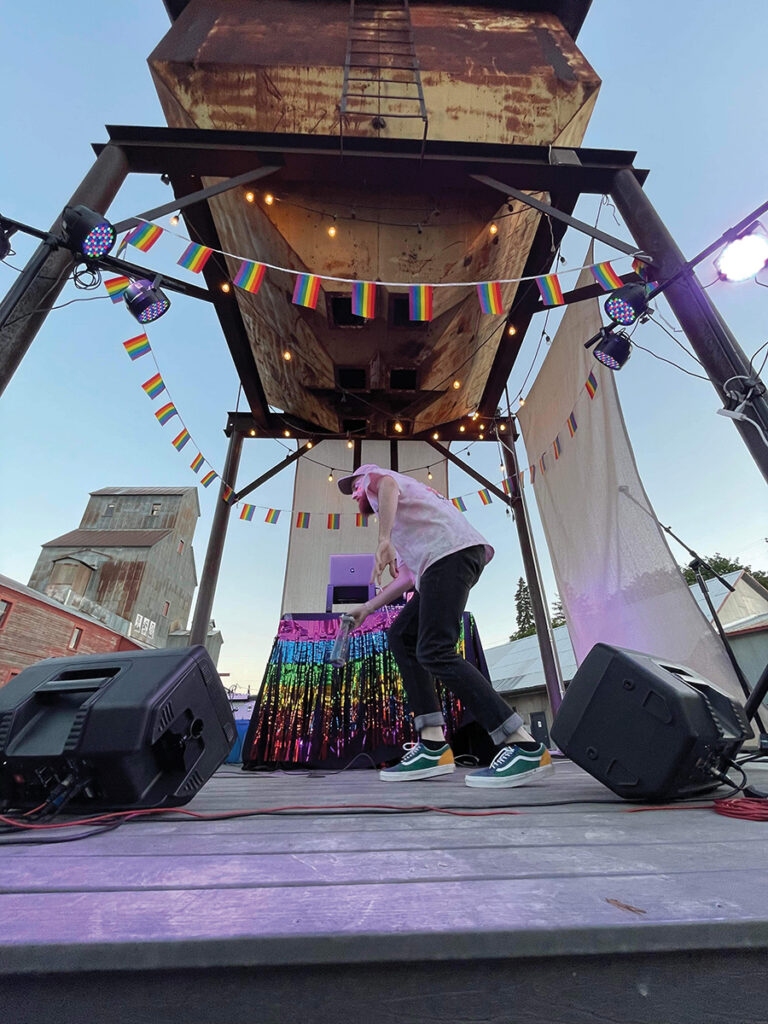 A snapshot from the 2021 inaugural Sandpoint Pride Festival. Photo by Racheal Baker.

“I wanted to help create that same feeling of support for people this year at the [Pride] festival in whatever way I could,” the recent graduate said, “so when [Sandpoint Pride Planning Committee co-chair] Adrian [Murillo] told me he wanted the younger generation to have a voice in this event, I jumped at the opportunity.”

That concept of “voice” is central to this year’s Sandpoint Pride Festival, which sports the theme “Many Voices, One Heart.” This year’s festivities kick off Friday, July 15 with BCHRTF’s 30th anniversary celebration starting at 4 p.m. and continue into Saturday, July 16 with official Pride events from 2-10 p.m. Both days of events will take place in Sandpoint’s Granary Arts District at 513 Oak St., which is also home to several businesses, including Matchwood Brewing Company and Evans Brothers Coffee Roasters.

“As small business owners and community members, we are proud to use our space to connect people to each other to build community and trust,” Matchwood owners and Pride Planning Committee members Andrea Marcoccio and Kennden Culp stated in a media release.

“In a world that is filled with difficulty and disconnection, we hope this event and our brewery can serve as a space where people feel welcome, safe, cared for and appreciated,” the pair added in a joint statement. “We are very proud allies.”

The Granary Arts District will be teeming with live music, poetry readings, food vendors, advocacy booths, kids’ activities, a Pride costume contest, dance parties and more throughout the two days of events. Speakers will include Lauren Bramwell, of ACLU Idaho, who will address the flurry of anti-gay, anti-trans legislation around the country — including in Idaho — and how the American Civil Liberties Union is confronting it.

Among the most notable happenings will be the second annual Sandpoint Pride Queen B Drag Show, featuring regional and nationally acclaimed drag queen performances, slated for 7 p.m. on Saturday. For a full list of events and times, visit sandpointpride.com.

At its core, organizers said that the festival’s purpose is to “affirm the equality and dignity of the LGBTQ2S community, to acknowledge and appreciate their contributions to society and to inspire engagement with and support for the ongoing movement to secure the rights, freedom and safety of queer and trans individuals.”

Last year’s Pride efforts were headed up by local PFLAG President Jeff Bohnhof, who said he’s been able to take on a more flexible role this year thanks to strong support from the community. He said he always envisioned Pride as an event all its own, “working in tandem with PFLAG.”

“With the amount of volunteers and the people willing to step up and assume leadership roles it is happening faster than I expected, which is pretty exciting,” he told the Reader.

A multigenerational group of emcees will serve as the literal voices of Sandpoint Pride this year, including Jim Healey, Theo Kinnman, Meshberg and her sibling, Sidney Meshberg.

Meshberg said she wants to share that philosophy of safety and acceptance she was able to foster as a part of the SHS Human Rights Club on a larger scale in her role at the 2022 Sandpoint Pride Festival.

“It is a place where you can feel welcomed and comforted by your community,” she said, “and see that there are other people like you who have your back.”

Bohnhof said that Sandpoint’s growing Pride is indicative of how such events are gaining traction throughout the region.

“With all of the anti-LGBTQ legislation being brought up throughout the country this past year, it’s exciting to see how Pride is growing throughout the country,” he said. “This year alone, Newport, Wash., had a small Pride event for the first time. There’s the first annual Silver Valley Pride in Wallace, Idaho, the weekend after [the] Sandpoint Pride Festival.

“With all the negativity, love is growing, spreading,” he added, “and love will win.”

To learn more or get involved with the Sandpoint Pride Festival, visit sandpointpride.com.

Organizers of the Pride event in Sandpoint are geared up for two days of celebration Friday, July 15 and Saturday, July 16, but they’re also aware of the potential for disruption, harassment, even threats from intolerant individuals and groups. A vivid example of that came on June 11, when 31 members of the white nationalist group Patriot Front were arrested in Coeur d’Alene before they could commit a riot against the Pride in the Park event.

Of course, Patriot Front wasn’t the only group on hand to protest Pride — members of White Lives Matter as well as “far-right pastors, alt-right propagandists and a biker group,” as the Inlander reported, were also gathered at or near the park.

In an effort to provide a safe event, Sandpoint Pride has adopted a much more robust security plan than last year, spurred specifically by the events in Coeur d’Alene last month.

“Some of us were concerned and so we had a meeting … with the city administrator and the chief of police, just to impress on them that we had concerns and wanted to work in partnership to develop this safety plan,” said Adrian Murillo, a poet, activist and co-chair of the planning committee, who will be opening the event July 15 with some words of affirmation for the LGBTQ2S community.

“I want to talk about resilience,” he said. “Resilience is not just something that’s intrinsic, it’s learned, and by coming together we can build up our resilience.”

The event will be hosted near Matchwood Brewing Company in the Granary District, which is located on private property. As such, no guns or weapons will be allowed on the premises, with security available to enforce that prohibition. Other policies and strategies to ensure safety include the instruction not to engage with any protesters or agitators who might show up.

“Do not engage in negative dialogue or debate,” the safety plan states. “Debating only serves to reinforce their belief they have a valid position. Our rights, freedom, dignity, our lives, are not debatable. Focus your energy on the community celebration rather than those attempting to distract from the purpose of our event. They want attention. Don’t give it to them.”

One big difference with Pride this year will be a fenced buffer zone down the center of Oak and Church streets in order to keep demonstrators or other unwanted individuals even farther from the festivities.

Meanwhile, volunteers underwent a peacekeeping training session led by PJALS, in which they learned techniques and tactics to defuse potentially hostile interactions in a respectful manner while also reporting any concerns — however big or small — to a lead security person on the volunteer team who will be on site with responsibility to interact with local law enforcement, if need be.

Of the peacekeepers, Murillo said, “It’s really about the tone and the flow of the event; they’re keeping it celebratory and fun and hopefully encouraging people to be engaged — to create that sense of community.”

Sandpoint City Administrator Jennifer Stapleton told the Reader that because the event is on private property, Sandpoint police will not be responsible for security, though the department has coordinated with event organizers and is aware of the security and event management plan.

Sandpoint Police Chief Corey Coon stated in an email July 12 that, “At this time, we have no credible information that there will be any formal protests or outside organizations coming into our area to protest the event as we saw in Coeur d’Alene.”

For Murillo, fellow organizers, volunteers and attendees, the sincere hope is that the event will play out in its full spirit and expression of Pride.

“We have learned to be both realistic and joyful. That’s what we want this to be — a joyful coming together,” Murillo said.