‘Seeing the light go on’

When Mary Levy began her journey as a serious artist upon moving to Sandpoint about 35 years ago, her aim was simply to do what she felt called to do: paint.

“I was just aiming to complete a picture and make me happy — that’s it,” she told the Reader, adding that she’s never been one to self promote. “I just want to paint.” 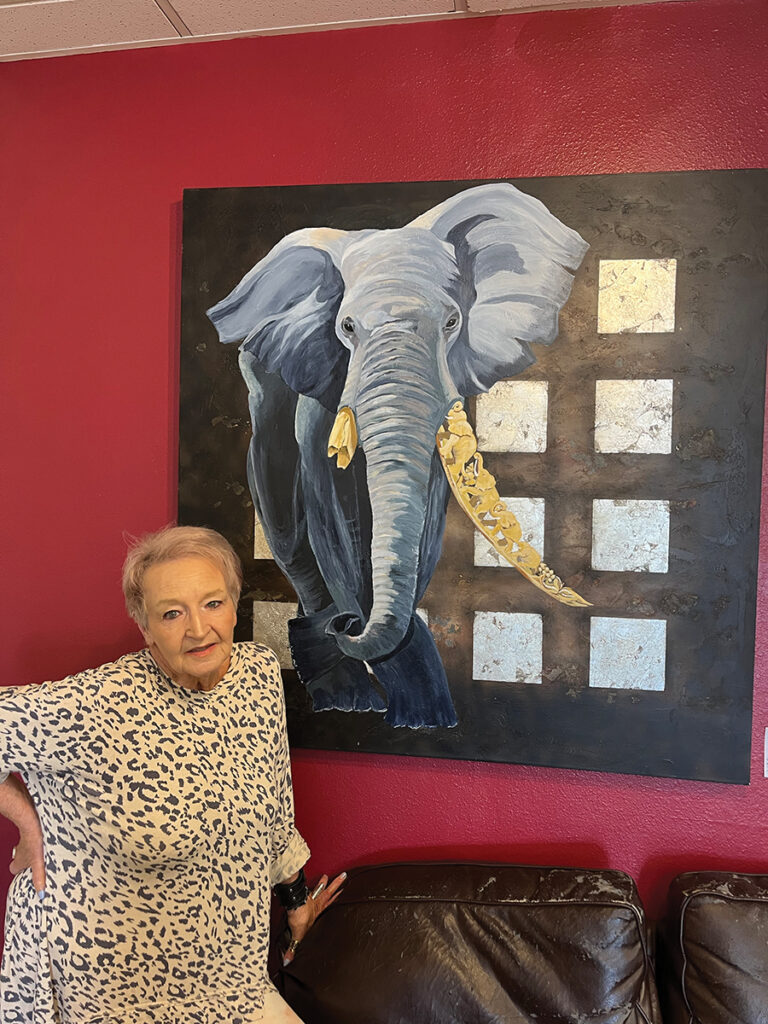 Artist Mary Levy stands beside her piece titled, “Bring It,” featured in her collection, “The Wild Life of Mary Levy,” currently on display at Monarch Mountain Coffee. Photo by Lyndsie Kiebert-Carey.

She joined the Pend Oreille Arts Council Board of Directors and completed 22 paintings in two months in order to do a show with the nonprofit.

“That’s kind of wild,” she said, looking back.

“The feedback was really good and it encouraged me to keep going with it,” she added.

Levy has certainly kept at it, and is currently showing her latest work at Monarch Mountain Coffee on First Avenue as the business’ featured artist.

While Levy’s love for painting has remained steadfast, her subject matter has evolved.

“I’d say the thing that’s changed in the last, I’d say, five, six years, is that I’m doing very powerful things that have messages, but they’re left to the viewer,” she said. “It’s not political, nothing like that, [but] when you look at it or read the title, you walk away with a different feeling.”

One such piece, currently featured at Monarch Mountain Coffee, is titled “Bring It.” In it, an elephant with one broken tusk and the other one carved is exiting an enclosure.

“He’s climbed out of everything that’s been done to him and he’s still alive, and he’s like ‘is that all you’ve got?’” she said. “That’s my favorite piece in [the show].”

Animals are often the inspiration for Levy’s work, but she said she is able to paint anything from portraits to landscapes.

Beyond her technical prowess, Levy has proven herself an accomplished art teacher during her time in Sandpoint. Through teaching, Levy has been able to witness something she calls “seeing the light go on.”

“Teaching is a hoot,” she said, adding later: “To see the light go on with [my students] — I think that delights my soul even more than doing it myself.”