Love is a Dog From Hell

The headline of this article comes from a book by poet and author Charles Bukowski, who lived a bitter, drunken existence periodically punctuated by moments of brilliance. Love is a Dog From Hell is a collection of Bukowski’s poems published in 1977. Some contained insights into love, but most of the poems featured the usual failure, stink and desperation that became Bukowski’s stock in trade. 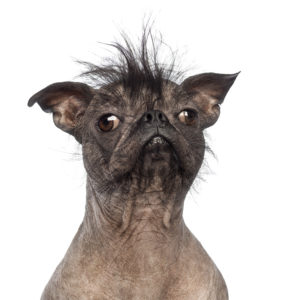 As far as romantic books to read to your beloved on Valentine’s Day, it probably won’t win you any favors — unless you’re shacked up with a misanthrope who hates people as much as you do.

Which brings me to my point: How do misanthropes find love? How do they love one another when they despise damn near everyone else, including — maybe especially — themselves? I feel the same about hideous dogs and other homely species in the animal kingdom. How do these mongrels find love when it appears they swan dove off the ugly tree and hit every branch on the way down? Is love truly blind?

I spent most of my 20s finding ways to get away from people at all costs. I hitchhiked around the West; I holed up in back bedrooms and locked the door; I hiked along desolate mountain ridges; I wandered lonely alleys at night and watched the forlorn blue glow coming from windows lit by television sets flashing lonely scenes on the trees in the yard.

It’s not that I hated people. I try not to hate anything. But I took umbrage with how much ugliness we foist upon one another on a daily basis. How can a species be capable of such beauty and such horrible ugliness at the same time? Why would I want to waste my time with someone when I know the darkness could lurk in their hearts as well?

But, as the cosmos would have it, I found love. I found it in the most unlikely of places: Roxy’s bar on a Friday night.

I had returned to Sandpoint to see old friends and help nurse a broken heart after my former relationship had dropped like a jetliner onto the runway and burned beyond all recognition. I wanted nothing to do with love and made that clear to anyone who cared to ask. All I wanted to do was tip back some whiskey and catch up with my old group of friends after living out of the area for a couple years.

While out with my group, I noticed a couple of new girls had joined the gang. One of them caught my eye. She had a smile that would launch a thousand ships, as the saying goes. After talking with her, I realized we were kindred spirits in many ways. She’d moved to Sandpoint for work while I was away, and it turned out we had a lot in common.

We spent the next 72 hours together. We sat on the front porch beatboxing and singing together until sunrise; we walked through muddy clay at Sunnyside and skipped rocks in the quiet lake; we hitchhiked out to Hope to drink beer from Murphy’s Bar, where there used to be a parrot that served beer from a tap. The parrot was later eaten by the dog and the bar closed shortly thereafter, but we had already begun building the loose framework of our relationship.

Cadie was in pretty much the same place I was at, as far as love goes. She made it very clear that she was only interested in being friends and taking things slowly, which was just fine with me. However, when I left town on a midnight train to Portland after spending the whole weekend with her, I had already decided that I would move back to Sandpoint after tying up loose ends in the big city. I just had to see what was going to blossom between us.

I’m so glad that I did because I moved back to town, got an apartment and began wooing this woman that I now call the love of my life. I can’t imagine life without her by my side.

So yes, love is a dog from hell, but it’s also a life ring in stormy seas. Even when you think there’s no one out there who might be interested in a romantic life with you, chances are you’re wrong. If a mongrel like myself can find the love of a good woman, there’s probably hope for the rest of you, dear readers. Don’t ever stop looking for it.