The Idaho Department of Fish and Game will hold an open house in Priest Lake Thursday to display options for a Cold Water Bypass system meant to cool Priest River and hopefully create more inhabitable water for native fish species.

Priest River is dealing with “multiple impacts” that could cause warmer water temperature, said Kiira Siitari with IDFG. One such impact could be the Outlet Dam, which has been in place since before IDFG started collecting data on fish populations in the river. Siitari said that during drier years, there’s less water available to send from Priest Lake over the dam to tributaries like Priest River, and shallow water heats up quickly. 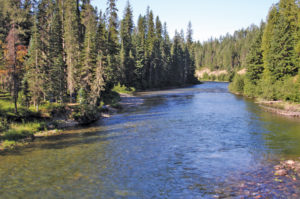 Thats combined with the ebb a flow of the seasons creates a waterway too warm for native fisheries like westslope cutthroat trout and bull trout.

“Longer, hotter summers and shorter winters exacerbate this problem, which we saw happen in 2015,” Siitari said.

“Summer temperatures in Priest River have been limiting to native fish for at least the last 45 years, basically as long as Fish and Game has been sampling this river,” she said. “We have a report from 1974 that notes water temperatures above 65 degrees and low cutthroat trout numbers even back then.”

Stocking the river with hatchery fish even proved unsuccessful, Siitari said, because the trout couldn’t handle the August and September heat.

To help combat the issue, IDFG has been working to create a cold water bypass system, bringing cold water from Priest Lake into Priest River. How they’ll do that, exactly, is still in the works and will be on display at an open house Thursday at Priest Lake Elementary 3-6 p.m. The school is located at 27732 Highway 57.

The four alternatives currently up for consideration are a pump system, siphon system, gravity fed system or groundwater well system — all of which would move cold water around the Outlet Dam and, ideally, cool Priest River.

“We’re not voting on any one alternative,” Siitari said. “The alternatives were meant to give us an idea of the feasibility of using cold water from the lake to cool the river.”

Next, IDFG will research the potential impacts the four designs could have beyond the intention to add cold water to Priest River, including “limnological, water quality and groundwater analyses,” according to Siitari.

“We can’t make a decision on whether or not to build anything until we can assure folks that there won’t be unintended consequences to the lake or river,” she said.

Because the Priest River Cold Water Bypass is expected to be a long-term process, Siitari said there is no set start and end date for comments on the project.