A Newport apartment complex caught fire on Friday afternoon and was extinguished after several hours of suppression by volunteer firefighters from a half dozen different agencies.

Newport volunteer fire chief Rob Owen said the call came in at approximately 3:48 p.m. Friday afternoon. The fire was reported in an upstairs corner unit, and was burning when Owens and his volunteer fire crew arrived on scene. 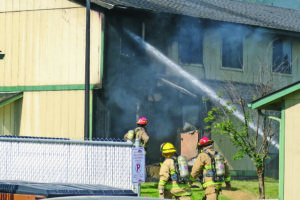 “We had it knocked down in about three or four hours,” said Owen. “From that point, I was there until about 6:30, 7 a.m. the next morning, staying overnight along with a couple of other firemen to make sure any hotspots didn’t reignite.”

Owens said most of the fire damage was contained to the unit in which it first ignited. The cause, at this point, is still being investigated, but according to Owen it appears the fire originated in the kitchen.

“The unit immediately adjacent to it had not as much fire damage inside,” he said. “It got pretty hot and broke out some of the windows, and the fire went along the eaves of the roofline and burned the outside of three units.”

“I don’t know if, structurally, they’ll be able to save the couple units that weren’t fire damaged, or if they’ll end up tearing the whole building down,” said Owen. “They’ll have to work with their insurance adjustors. At this point, all of those units will be unliveable, even the ones with just smoke damage.” 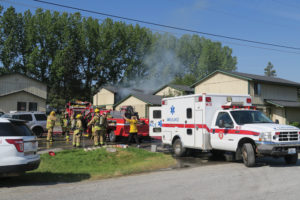 “I’d guesstimate there was about 60 different people that came and volunteered their time and services for this,” he said. “I’d like to thank all of the volunteers and people willing to put themselves in harm’s way and to sacrifice their time to make our community a better place.”