Don Otis is always trying to reach a higher place.

Two weeks ago, he completed two Fourteeners (peaks above 14,000 feet), and has set his sights to bag the final peak later this month, completing all 66 in the contiguous United States. 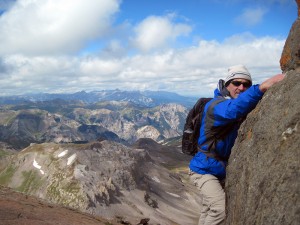 The list of climbers who have bagged all 66 is most likely short, though it’s difficult to determine the exact number.

Otis never set out with any specific goal in mind to climb all 66 but now has the elusive feat in his grasp.

“I don’t think I really stopped to say I could do all of these,” he said. “It wasn’t until I moved to Colorado in 2007 and spent five years there before coming back to Sandpoint that I thought, ‘Maybe it’s possible not just to get all of Colorado’s, but maybe I can get the rest of them, too.’”

From an early age, he’s been drawn to the mountains and backcountry, seeking that summit view where life somehow makes a little more sense.

“When I was a kid growing up in Los Angeles,” said Otis, “I was always trying to climb something. We would con my mom into taking us up to the foothills in North Los Angeles and dropping me and a couple buddies off so I could scurry up some of those canyons. I just liked to do stuff; if it wasn’t hiking and climbing, it was seeking adventure any way I could find it.” 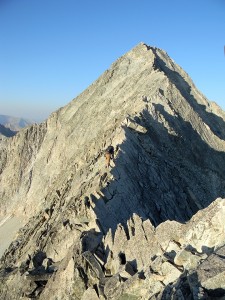 The adventure began over 40 years ago with Mt. Whitney, the highest summit in the contiguous U.S.

Over the years, Otis checked a few more peaks off his list, but it wasn’t until moving to Colorado, where 53 of the peaks are located, that his quest kicked into high gear.

Part of the challenge is not always in the climb, but in finding people to hit the backcountry with.

“You’re always looking for someone to do them with you,” he said. “You’re thinking, ‘God, I don’t want to go up there by myself.”

Some hiking partners are old friends, like Jeff Beeman, Ken Emerson, and Genny Hoyle. Others came from near catastrophe.

While descending Mt. of the Holy Cross in Colorado one season, Otis tripped and fell, splitting his head open on a chunk of granite.

“This ER doctor was sewing my head up afterward and said, ‘If you want to climb sometime, let me know,’ and I said, ‘What are you doing next week?’,” said Otis. “He ended up doing some of the really hard ones with me. It was great, I’ve got my own ER doctor with me now.”

Nonetheless, Otis has climbed 34 of the peaks solo.

“You have to be smart about it,” he said. “You have to look at the weather, to be prepared for anything. When were in the Sierras a couple weeks ago, we had nothing but trouble with the weather. We had snow, we had hail, we had a couple of good windows and took them.

Otis and his climbing partner ended up getting down the mountain just in time. 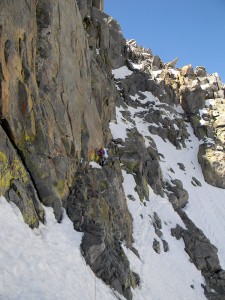 “We got off about 30 seconds before two major thunderstorms just hammered it,” he said. “You don’t want to be on top of a mountain when a storm hits.”

Of all the 65 peaks he’s bagged, Otis looks back on a few that were especially challenging.

“The hardest was the North Palisades in California,” he said. “It’s just a big ass peak. Colorado has got a couple of difficult ones. Capital Peak is notorious for what’s called the ‘knife edge.’ You’ve got to cross this ridge and there is a dropoff of a couple thousand feet on one side.”

Looking back, Otis is astounded at the statistics from his mountaineering.

The remaining peak Otis has left before he bags all 65 is Split Mountain in California.

“It’s a class 3 Fourteener,” he said. “I’m not sweating buckets over it, though it has 7,500 feet of elevation out of desert on the worst trail of any Fourteener in California.”

For his “day job” Otis owns a public relations agency called Veritas, which facilitates radio and television interviews for their authors. He also works with several nonprofit organizations in Sandpoint, and is plugged into the climbing and outdoor network in North Idaho.

“I love hiking around here,” he said. “I look at Scotchman’s or Mickinnick, or Gold Hill and I think, ‘We’ve got so many amazing places here in North Idaho and really terrific hikers, climbers, athletes here that I’ve met that are far better than I am.”

In addition to his outdoor activities, Otis is the author of five books. His topics range from political treatises, to fitness guides, to cathartic explorations of morality.

But overall, Otis finds his peace standing atop a summit.

“Some people are all about the fear,” he said. “I chase after the physical challenge. I love being on high peaks. There’s nothing quite like it. There’s just something magical about it.”