From her cozy downtown studio on Cedar Street, Nicole Black quietly spends another day doing what she loves at the pottery wheel: Making functional art that could last a lifetime.

Black’s Whiskey Jack Pottery has occupied the studio at 223 Cedar St. since June of last year. Since then, she has built the studio into a vocation she loves and a business that helps support her family. 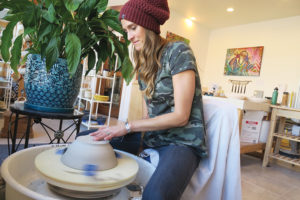 Nicole Black puts her signature spin on a new creation at Whiskey Jack Pottery on Cedar.

Take a stroll through Black’s studio, and you’ll get a quick idea of her style. The shelves have displays of mugs, plates, bowls and every other imaginable earthenware with Black’s signature style influenced over years of practice. The colors are bright, the dimensions flawless but human. Her dog Lola sits nearby, offering companionship and silent support. Everything about the studio speaks of a place that gives birth to creations made of love.

“It was in Dan Shook’s art class,” she said. “I always looked forward to it, but I didn’t expect it to turn into a career.”

After graduation, Black headed to college in Durango, Colo. to study sports medicine.

“I didn’t get accepted into any art classes because I had a sports major,” she said. “I remember there was a point when I realized all my notebook pages talking about body systems and stuff were surrounded by sketches. That’s when I realized I wanted to spin pottery.”

Black moved back to Sandpoint in 2002 and began taking adult art classes with her former teacher Shook. When the now-retired art teacher built a pottery studio at his home on Whiskey Jack Road, in 2006, he asked Black to come out and spin with him, and so Whiskey Jack Pottery was born.

“It takes a long time to refine your skills,” said Black. “It’s like 10,000 hours of practice just to get something worthy.”

As Black honed her skills at the wheel, she noted that her individual style had not blossomed yet. 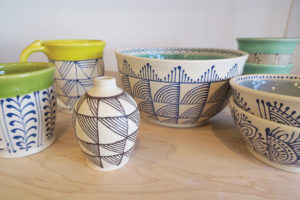 Some of Black’s earthenware featuring her unique design. Photos by Ben Olson.

“All those years in Dan’s space, my pottery looked a lot like his,” she said. “Each potter has their own shape. My shapes were similar to Dan’s. Just moving into this space here, my stuff is different. It’s been really fun to find my own style.”

Black’s style, as with many artists, has emerged out of the collective influences she’s built up over time. While Shook’s tutelage certainly had an impact on her creations, Black further defined herself with the henna-inspired designs that adorn her earthenware. Black has given henna tattoos during Farmers’ Market and other events for years.

“It feels like I’m speaking another language,” she said of her use of henna-inspired designs. “Each triangle and line has meaning.”

For Black, the enjoyment of spinning pottery is only augmented by the reality that she is creating functional art that may last someone a lifetime.

“There’s this misconception that ceramics are more fragile, or that you have to hand-wash them,” she said. “They’re actually really strong. You can buy a mug and it could last your whole life. And everything I make is dishwasher and microwave safe.”

Also, according to Black, serving on handmade pottery is yet another way to take care of your body and soul.

“People are really particular about their food and how it’s prepared,” she said. “Then they just top it off by serving it on a China-manufactured plate.”

Black’s line includes several iconic designs including what she calls “The Happy Mug,” which is her best seller.

“I’ve made several thousand mugs alone,” she said. “I also make a lot of plates and bowls. I make a plate with a bowl shape similar to my grandmother’s plates, so I call them ‘The Sally Plate.’ I just really like experimenting with what works.”

Black said she often takes custom orders, and her favorite is when someone wants an entire matching place setting. In fact, my girlfriend, Cadie, recently had a consultation with Black after moving into a new place with exposed shelves. The consultation concluded with Cadie happily ordering a full place setting with her own requests for color and design.

Because pottery takes so much work — sometimes 20 steps go into a single piece — to avoid the feeling of burning out, Black often takes creative breaks to paint with watercolors. Sometimes the paintings inspire new designs for her pottery. And so the creative muse continues spinning.

Now that her former art teacher Shook has retired from Whiskey Jack Pottery, Black carries on the name herself. Her studio is also her showroom, which she said helps give her pieces more value.

“People have a better concept of what went into making it,” she said. “You’re not just buying a finished product. But, even if I didn’t sell a thing, I’d still do this every day.”

To check out Nicole Black’s work, head to Whiskey Jack Pottery at 223 Cedar St. or check it out online www.whiskeyjackpottery.com. It’s always best to call ahead to schedule an appointment as office hours vary: (208) 255-6395.