Halloween is right around the corner. Ghastly ghouls and ravenous, sugar-filled child zombies are going to be trudging into the streets of Sandpoint. Seeing as it’s one of my favorite holidays (you get to dress up AND you get candy? Sign me up), I figured a festive article could be fun. 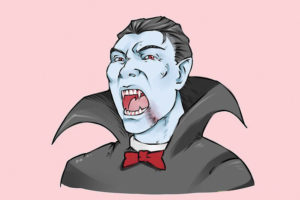 However, it may have been inspired by an actual affliction called Porphyria.

Porphyria is genetic, and not everyone that has inherited the genes will suffer from symptoms of acute porphyrias. Those that do can suffer from intestinal problems, an extreme sensitivity to the sun, breathing problems and heart palpitations, along with a laundry list of other unfortunate effects. Some of the more prominent amongst them are anxiety, depression, hallucination and paranoia.

Porphyria is kind of a catch-all term for a series of ailments from certain genes, and everyone that suffers from it won’t have identical symptoms. However, one thing it does have in common across virtually all forms is that it affects heme production, a major part of hemoglobin, the red cells in our blood. Blood transfusions, and hypothetically, ingestion of blood can alleviate some porphyrias, which may have also given inspiration to the vampire mythos.

Bram Stoker’s “Dracula” (1897) was the beginning of most vampire fantasy (sorry, Twilight fans.). It introduced the titular Count Dracula, that would later be emulated in film by countless actors, starting with the famous Bela Lugosi, from the 1931 adaptation of the novel. They, uh … took some creative liberties.

While Count Dracula wasn’t a real person, he was based on a very real, and very scary, human being.

Vlad Tepes, also called Vlad Dracula (Dracula means Dragon) or most famously Vlad the Impaler, was thrice a prince of Wallachia (an area that included Transylvania in modern-day Romania) during the 1400s. This dude was famous for an insane amount of cruelty, with stories of him impaling so many of his foes on wooden pikes that he created forests of the dead.

Ironically, his cruelty managed to create a great deal of order in Wallachia, because nobody likes being impaled, but the authenticity of these claims has been disputed.

As far as historians know, Vlad didn’t drink people’s blood, and he died on the battlefield, so he most certainly wasn’t immortal.

Another prolific figure that may have added to the vampire lore was a woman of unspeakable cruelty: Hungarian noblewoman and famed serial killer Elizabeth Bathory.

Not many people know her by name, but know her by her deeds. Legend has it, she would exsanguinate (bleed out) young, beautiful virgin girls and bathe in the blood to prolong her own youth and beauty.

The authenticity of that claim is suspect, but it was proven that she killed many young women in horrific ways, including cannibalizing them.

Vampirism isn’t restricted to humans, though the actual term is hematophagy (“to eat blood” in Greek)

Vampire bats are the most famous, and probably the weirdest. They evolved from fruit-eating bats, which is where they inherited their piercing teeth. They initially ate insects that siphoned blood or ate from open wounds, but eventually skipped the middleman and went straight for the blood.

Attacks on humans in developed countries are rare; we don’t often sleep unexposed in outdoor areas. They have the ability to transmit rabies, just as any other rabid creature does, but it’s exceedingly rare. No reason to head outside with a stake and garlic!

Most people don’t think of vampires when you say “mosquito”, but it fits. Mosquitoes are the most prolific blood-drinkers on planet Earth, also acting as one of the largest transmitters of diseases for humans. Any bad juju you’re carrying in your blood is neatly pulled up by their little syringes, stored and carried to the next victim, where your blood mixes with theirs the next time the mosquito takes a drink. This is how West Nile Virus, Malaria and Zika have spread with such terrifying efficiency.

They don’t do it to be jerks. The females need the nutrients from blood to produce eggs. While we want to exterminate everything that inconveniences us, mosquitoes are a major food source for bats, fish and countless other important parts of the ecosystem.

Some vampiric creatures live in water. Leeches are a great example, nasty worms that latch onto things to suck their blood. Their saliva, much like mosquitoes, contains a natural anesthetic, which dulls the nerves in the area that it’s feeding from. This makes it less likely to be noticed and removed, ensuring a continued survival.

We’ve used leeches in the past to draw blood from sick people, especially those with blood infections. We continue to use them in modern medicine for all sorts of things from their anesthetic saliva to improving bloodflow to reattached limbs.

Lampreys are another aquatic vampire. You’ve probably seen them attached to the underbellies of sharks on TV.

There are even vampire birds. The red-billed oxpecker in Africa will pick ticks (another blood-drinker) from oxen, which would be great for the animal it’s picking from, if it weren’t for the fact that the bird is really after their blood. They will continue to peck and drink blood from their host, consuming far more than the ticks will. These wounds have the potential to become infected as well. Yowch!

Stay safe this Halloween, and be mindful of vehicles. You can see them a lot better than they can see you!