Editor’s Note: This is the third and final piece in a series of articles we’ve done during April to highlight families in our community living with autism.

When Henry Dye was born eight years ago, his parents Karl and Tiffany Dye knew there was something special about him.

“He screamed for the first seven months of his life,” said Tiffany. “I’m not kidding, it was constant. And he never slept. The first time I actually put him to sleep after giving him a little Benadryl I literally cried. I had never put my baby to bed before.” 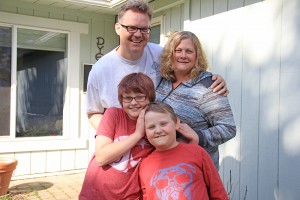 Karl and Tiffany Dye (back row) with Hattie (left) and Henry (right). Photo by Ben Olson.

When they brought Henry into their pediatrician, Dr. Joyce Gilbert, they were told he had a sensory process disorder. The Dyes were now dealing with the reality that their second child was in the process of being diagnosed with autism.

Henry, now 8 years old, and his older sister Hattie, 10, aren’t your typical kids on the autism spectrum. But then again, nothing is typical when it comes to autism.

“Both of them are very intelligent,” said Tiffany. “They both taught themselves to read when they were two years old.”

Hattie, though only in fourth grade, now reads at an 11th grade level. She enjoys recycling materials and making unique creations out of them. For example, she took a doll without a left leg and fashioned a wheelchair for her out of cardboard. She even memorized every president at one time, citing obscure facts about each.

“Calvin Coolidge had two raccoons,” she told me. “One of them wore a hat.”

Henry is also whip-smart and high functioning. He likes to cook and bake and enjoys making lists.

“Lists are so important to Henry,” said Tiffany. “If it’s not on the list, it’s not going to happen.”

The Dyes are also used to receiving phone calls from time to time asking for “Mr. Henry Dye.”

“Henry came up with a new video game concept, and sent an email to Nintendo of America,” said Tiffany. “They called up one night said they don’t consider outside ideas, but they would love to have him come to their school since they loved his idea. It’s this private college that specializes in game and coding. I don’t think they understood that he was only 8 years old.” 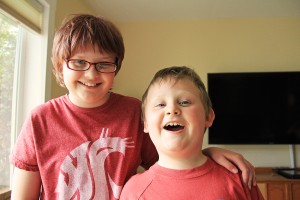 Though Karl and Tiffany consider themselves blessed to have two very high functioning children on the autism spectrum, they realize it has been a long road filled with twists and turns, and a core group of people in the community have helped them along.

“We are amazed and blessed that Sandpoint has so many great people and caregivers,” said Karl. “It feels like a big family for us.”

“We have the most amazing group of therapists,” said Tiffany. “I don’t know where we’d be without [speech language pathologist] Heather Penske and Dr. Gilbert.”

The Dyes said that Dr. Gilbert was the “point of the spear” for them.

“We’d reach out and she would refer us to people,” said Karl. “She helped us access the state Medicaid, which isn’t income-based, but on needs of the child. We consider her a friend now.”

“Medicaid gets bantered around as a giveaway program for the poor,” said Karl. “But our experience with it has been great. It’s the best use of our tax dollars, and we’re big believers of the program. If there weren’t programs like [the Katie Beckett program], we wouldn’t be in as good of a position.”

Though programs like these are invaluable, Tiffany also credits being present equally as vital.

“The key is early intervention and parental involvement,” she said. “I would always go to their therapy sessions. I look at it this way; if you had kids in soccer, you’d go watch them play, right? It’s the same with therapy.”

The Dyes also credit members of the community that are going through the same experience as guiding lights: “Lisa Barth helped us navigate the system. I think Team Autism 24/7 is a really great resource for people like us. And Henry began behavioral therapy with Aarow Ellis. She’s great. She’s like an autism whisperer.”

Tiffany also mentioned occupational therapist Mary Quinn-Hurst from All About Kids: “She had been paramount in navigating our sensory world.”

When asked to give some advice to parents questioning whether their own children may be on the autism spectrum, Tiffany said, “There’s this huge stigma about autism, like if you don’t get the diagnosis, it’s not real. It’s not the end of the world. All you can do is be the best parents you can to your kids. If you think something is wrong, reach out. Get a diagnosis.”

With both children looming closer to adolescence, each parent has been preparing in their own ways for the potential cruelty of teenagers.

“I worry about everything, Karl worries about nothing,” said Tiffany. “Somewhere between, we make it work. Henry is charming and has good friends that protect him and look out for each other. Hattie is trusting and impulsive and gullible. It’s a mom’s nightmare, but with so much awareness and acceptance, it’s getting easier. Like Henry said the other day to one of his friends, ‘It’s not contagious, you can’t catch it.’”

“I feel like we were pulling a rope through a snowstorm,” said Karl, referring to the years leading up to the present. “We just have to keep moving. One foot in front of the other. The snow is lifting now.”