“Liza, Liza, Skies are Grey” is something of a departure for legendary local cinematographer Erik Daarstad.

One of the few fictional films he’s undertaken in his long career, the tightly focused story of love and self-discovery in the 1960s required a few changes to Daarstad’s modus operandi. But it was also an opportunity to help a longtime friend and colleague complete a personal project more than five decades in the making. 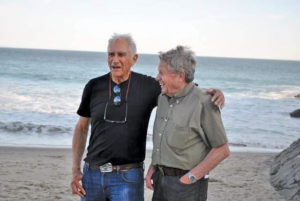 Terry Sanders, left, and Erik Daarstad, right, share a moment on the set of “Liza, Liza, Skies Are Grey.”

According to Daarstad, “Liza, Liza, Skies are Grey” writer and director Terry Sanders wrote the film script in the ‘60s as a personal meditation. However, the screenplay went unproduced for years until Sanders asked Daarstad to help him complete the project.

“He decided, ‘Let’s try to make it on a really low budget,’ so we did,” Daarstad said.

Shooting the film on a low budget presented both challenges and opportunities. As opposed to the process of photographing a documentary, where the objective is usually to capture images as true-to-reality as possible, a fictional film allows more control over the ultimate look and feel of its aesthetics. Daarstad said it was a rewarding experience but also a trying one, given his and Sanders’ age.

“We had a good time doing it even though both Terry and I are in our 80s,” Daarstad said. “So it’s a little bit of a challenge if you work long days and whatnot.”

The movie follows two teenagers, 15-year-old Liza and 16-year-old Brett, who embark on a four-day motorcycle trip up the coast of California during the summer of 1966. Nothing on the road goes quite as expected as the two young travelers explore first love in a turbulent year.

Actors Mikey Madison and Sean H. Scully star as Liza and Brett, and Daarstad said it was rewarding to work with their caliber of up-and-coming talent. Likewise, it was a pleasure to work again with Sanders, a two-time Academy Award-winning filmmaker who has formed a tight personal and professional connection with Daarstad.

“We’ve become very good friends over all those years,” Daarstad said. “In terms of a working relationship we’ve done close to 30 films together. We’re both aware of what the other would like.”

Local residents have a chance to see their collaboration for themselves when “Liza, Liza, Skies are Grey” plays 7:30 p.m. Friday, Nov. 3, at the Panida Theater. The film is unrated but contains brief language and sexual content equivalent to a PG-13 rating, so parental discretion is advised.