The Sandpoint City Council voted unanimously at a special meeting Aug. 26 to advance a land swap on Bridge Street that staff argued would give a larger footprint to downtown redevelopment while serving the city’s longer-term goals of the Sand Creek waterfront master plan.

Following the council’s vote, a public hearing will take place Wednesday, Sept. 16 at 5:30 p.m. to consider the disposition of the land at the corner of Bridge Street and First Avenue, stricken by a catastrophic fire in February 2019 that resulted in the loss of several downtown businesses.

While the properties in the affected area — the so-called “hole” — had been previously subject to several owners, Bridge Street LLC acquired the parcels after the fire, now intending to turn the site into a mixed-use development including a much-expanded version of The Hound pizza restaurant. 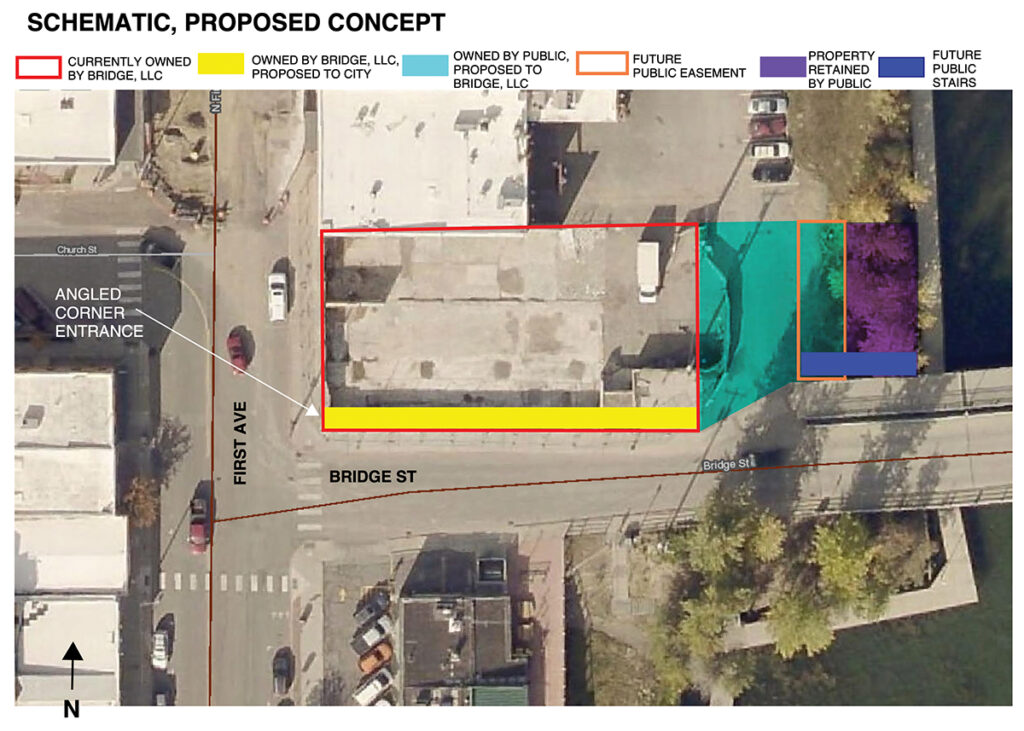 As it stands, the city owns the land extending across the throughway on the east side of the Bridge and First property to the waterfront, and extending into Sand Creek.

According to a presentation from Sandpoint City Administrator Jennifer Stapleton, the city’s property encompasses 13,634 square feet, with 6,649 square feet underwater. The upland portion, accounting for 6,985 square feet, is valued at $410,000 or $58.70 per square foot.

That section of property would be traded with Bridge St. LLC in exchange for a six-foot-wide strip of right of way along Bridge Street amounting to 890 square feet, worth $46,673.

As well, the city and the developer would partner to construct a new retaining wall with stairs and landscaping along Bridge Street to improve access to the waterfront boardwalk and adjacent businesses.

According to presentation materials at the Aug. 26 meeting, the city would take on the infrastructure work, amounting to $150,000, with Bridge St. LLC kicking in $75,000 — the latter making available through an easement about 1,500 square feet along the water as a public-private deck space.

In total the city would contribute about $560,000 while Bridge St. LLC would come across with $378,408 in value — the difference of $181,592 being provided by the developer in cash to help assist in stormwater management and other improvements to the Farmin’s Landing area just north of the parcel, next to the Panida Theater.

“We have limited really developable value of this property [on the waterfront] at all, and if a portion is included in a property swap, that limits it even further,” Stapleton said, illustrating the upside to trading with Bridge St. LLC to serve both the developer’s goals and the city’s.

Asked by Councilwoman Deb Ruehle whether the swap would result in subterranean parking for the envisioned mixed-use development, Stapleton said, “Yes, potentially.”

The council’s vote approved the valuation determination presented by city staff, sets the land swap on the agenda for the next regular City Council meeting, which is accessible via the City of Sandpoint YouTube channel. Go to sandpointidaho.gov/your-government/meetings and click on the “City Council” button on the right side of the page to register for the meeting.