Life at the Rainbow Inn 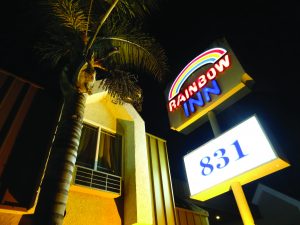 The Rainbow Inn is just one of many budget motels dotted around urban California.

A black family is packing all they have into a small car, ready for yet another hopeless opportunity. During the day people ignore each other, but after sundown they mumble greetings to assure there is no threat. Young night owls move in small packs, their backs curved like frightened cats.

An estimated 3 million people in the United States face homeless every year, a group that grew from an unnoticed minority into a full-blown class. The main causes of homelessness are mental illness, substance abuse and financial strain.

Welcome to America, the first-world country leading in homeless population

On a road trip through the western U.S. in 2014, I stayed in the cheapest motels, run almost exclusively by immigrants from India. The worst of them promote ‘Weekly Rates,’ and once I rented Room 237 for three weeks at the Rainbow Inn — 831 South Beach Boulevard, Anaheim.

These are the kind of digs where you want to keep your flip-flops on in the shower and smudgy windows hold the daylight back. The walls have stains of suspicious origin and the blanket in a non-smoking room is freckled with cigarette burns. Don’t look under the bed. It hasn’t been vacuumed in years. Most eight-dollar accommodations in Bolivia are more pleasant.

Cheap barbecues dominate doorsteps and trash bins are full of microwave meal boxes. A sign instructs me not to hang clothes to dry on the balcony. The snack machine isn’t quite cold enough to keep chocolate from going soft and shopping carts collect dust under the staircase.

The manager tells me, “I don’t let the walking people in.” Not “homeless” or “addicts,” but “walking people.” This confuses me at first, but then makes complete sense—bicycles and shopping carts provide their mobility. The rest of America owns a car.

Room 217 hosts a skittish, balding man who only comes out to dispose of his trash. When I walk by the door, I can smell his cigarettes. Room 117 occasionally dispenses an old lady in a blue nightgown who shuffles across the parking lot, clenching a coffee cup. I say “hello,” and she just stares at me uncertainly, then looks away. In front of her room is a neatly stacked pile of pinecones.

Arguments regularly wake me. At 2 a.m., a couple starts a fight that keeps increasing in intensity. I worry that it might get out of hand. What could I do if it did? She finally runs off. He leans over the balcony rail and closes the morning’s disruption with a sincere “Go to hell, bitch!”

In the morning, a black mom yells “Stupid nigger!” at her 4-year old son for dropping something.

A tall black man wanders out front, red-eyed and twitching uncomfortably. Fresh bandages make me wonder what happened to his arm, and who applies them daily. A skinny woman with wild hair sits on the sidewalk, wailing hysterically. He studies her with bewildered attention.

I meet Mr. Tsing from Pakistan. He objects to the homeless fornicating in the open, forced to experience a shred of human connection in public bathrooms or behind some bushes. “They cross the line of respect and spend money on wasteful things like drugs and alcohol.”

One woman screams, “My husband hits me for methamphetamine!” every time I see her. Some days she illustrates this by thumping herself in the head.

On an evening stroll, I am approached by several men who are more than just polite. I want to stay out longer to enjoy the cool, dark air. It’s the only escape from the pressing California heat that lingers in my stuffy room, but I quickly learn that L.A. after dark is for the homeless and hoodlums — and some better-kept younger ladies who are looking to make $30 to pay for their room. A cruising car slows down, a window is lowered and interest is expressed with a short honk.

In a way, this is a very stimulating environment. At the end of a day, I sit down with my journal and ask myself, What did you see today? But the unpredictability of these people makes me jumpy. The crowd colonizing the intersection of South Beach Boulevard and Lincoln Street often seems intoxicated or mentally ill. Social frustration intensified by psychological instability needs little provocation to turn into violence. I never know what to expect.

John lives in Room 109 with his wife and two cats. He is a friendly, thoughtful older man, sporting an outstanding beard. Julius—one of the cats—is orange, sleeps atop the air-conditioner and drinks from the swimming pool. Like all long-term residents, John and his wife open the door at night to let clean air in.

“We’re all in the same boat, so let’s be neighbors,” he suggests after he hears I’m staying for several weeks. The chance at connection in an overnight guest environment is scarce.

John and his wife used to share a large house with several others, but when everyone else moved out, they wanted to downsize. They found a smaller place nearby for a very good price and went to look at it. The ‘owner’ had given the address but never showed up to give a tour. Nonetheless, they decided to invest the last of their savings into a place with bad walls and an overgrown garden. It was the best deal in town. Too good to be true? It was.

The ‘owner’ didn’t own it, ran off with the money, and our friends were evicted. The deposit for an apartment is three times the monthly rent and prices in southern California are some of the highest in the world. There was no choice but to “temporarily” move into this motel. That was a year ago. John is working a simple job, and I am left to wonder how people can possibly get out of a situation like this.

I have seen a side of America most people choose not to be exposed to: the homeless, mentally ill, addicts, prostitutes, swindlers, drug dealers and thugs. For the middle and upper classes it’s easy to say the disadvantaged people I describe are lazy or dangerous. That way, they can ignore them without feeling responsible.

Being acknowledged as a human being when living as a ghost can mean a lot. I found that a greeting and a smile easily cracks their dark stare. Consider this the next time you come across one of these discarded people. I can never again see them as a nuisance after living among them.

These people hang their head in embarrassment while trying to crawl back into society. They suffer a culture that idolizes wealth and dislikes the impoverished. They are treated as the dirty feet of America. The richest country in the world could use a pedicure.

Marjolein Groot Nibbelink was born and raised in the Netherlands. She is interested in culture, language, psychology, socioeconomics and political history. After 8 years of traveling the world, she settled in Sandpoint. She is marketing director at MulitLingual magazine as well as Blue Creek Press and volunteers for Friends of Scotchman Peaks Wilderness.