In a Vox article Aug. 15, Emily Todd VanDerWerff called “Once Upon a Time in Hollywood,” the most recent film from iconic auteur director Quentin Tarantino, “The Movie to Argue About This Summer (August edition).” She then provided a primer on the central controversies swirling around the film: it “disrespects the legacy of Bruce Lee,” it heedlessly messes with history and it’s misogynistic. No matter how you feel about Tarantino’s work, there’s no arguing how important he is an artist. We’d go so far as to say his influence places him in the ranks of Orson Welles and John Ford. (Go ahead and argue with that.) 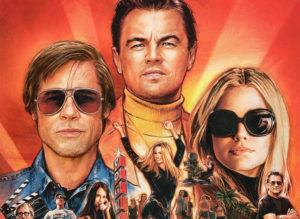 For those who have somehow avoided either already seeing the film or reading any of the approximate half-billion words devoted to it online, “Once Upon a Time in Hollywood” takes place in 1969, focused on a declining movie star (Leonardo DiCaprio) and a devil-may-care stuntman (Brad Pitt) as they scrounge and raise hell around TinselTown. The previously mentioned Bruce Lee makes an appearance, as does rising star Sharon Tate (Margot Robbie). The latter pulls the story to its essential dark heart: the Manson Family, which, for those who know their history, in real life murdered Tate and several others in August 1969. In Tarantino’s universe — and this is no spoiler — the story ends differently than the history books say.

It’s true, “Once Upon a Time” is not only Tarantino’s second-highest grossing film (so far), but has launched a thousand think pieces. Rather than pile on with another rumination, we thought we’d share a few questions we’ll be thinking about as we watch the movie and, if you’re anything like us, discuss afterward at a bar. You’ll have multiple opportunities to do both when “Once Upon a Time” comes to the Panida as a Reader Reel for six showings over five days Thursday, Aug. 29-Monday, Sept. 2.

Now, on to the questions:

•Is this film a work of nostalgia, historical revisionism or speculative historical fiction? Why does it matter/not matter?

•What version of America does Tarantino portray in this film? What role does American exceptionalism play in his brand of history?

•Did the fight between Cliff Booth and Lee occur in the world of the film or as a constructed memory of Cliff’s? Does that matter when assessing Tarantino’s treatment of Lee?

•Did Tarantino cynically deploy Sharon Tate to anchor his film in a shocking, yet aberrant, episode from American history — doing double damage as a misogynist and a bad-faith historian — or does his use of her as a fictionalized character reclaim her agency by subverting the historical narrative? (In other words, is he using Tate or retroactively defending Tate against those who used her?)

•Was 1969 really such a pivotal year for American culture? Was it the “end of innocence,” as many cultural observers characterize it, or did it only feel that way to people who thought there was “innocence” to be lost in America in the first place?

•Related to that, is “Once Upon a Time” an example of noxious late-Baby Boomer historical retconning, or is it a commentary on the noxious contemporary celebrity-media complex?

•Does this film fit into the “Quentin Universe”? How/why/why not?

•What role does the individual play versus the group in Tarantino’s oeuvre?

•In the era of “fake news,” do we really need “fake history”? What good does it do us to consider an alternate ending to the Manson Family murders? Does it need to do us good to be good art?