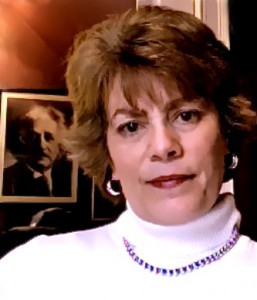 The trilogy is a unique true crime saga about one woman’s undying perseverance in a lonely battle for truth and justice.

In “Part One: Backtrack,” Thompson takes the reader back to 1976 when she was a 19-year-old deputy circuit clerk in the Logan County Courthouse. That year a series of murders unfolded in her hometown of Lincoln, Illinois, and she became a witness to suspicious events and circumstances relating to the Schneider triple homicide, a Manson copycat crime.

Only one 21-year-old man was charged and convicted of the slayings. Two other men Thompson suspected as accomplices were never implicated and went on to become attorneys.

Years later in 2001, Thompson’s father dies a disturbing death, which takes her back to Lincoln.

Following her father’s memorial, she approaches Logan County State’s Attorney Tim Huyett and tells him of her longtime suspicions regarding the triple homicide. She is granted access to the old murder case files and begins her own investigation into not only the Schneider murders but also the murders of Michael Mansfield, Ruth Martin, and Jay and Robin Fry.

Bonnie J. Thompson is no stranger to the world of criminal law and courtroom drama. Her father, Roger W. Thompson, and grandfather, Donald L. Thompson, were both noted trial lawyers. The Logan County Courthouse provided Bonnie with a very important education, for it was there that she learned the value of truth and justice.

Although she often considered pursuing a degree in law, she found herself more drawn to music, writing, and investigation. In her spare time she performs as a professional singer/songwriter/guitarist, and she particularly enjoys singing jazz and blues standards.

Her new trilogy can be purchased through her website: www.buriedtruthtrilogy.com.