You Have Far More in You than You Know

This past weekend, several of my friends and I decided to take in the beauty of Priest Lake. On Saturday, we planned to leave one car at the Beaver Creek Campground and drive my car to the Plowboy Mountain trailhead. The one-way hike is 11 miles in total, the first half of which is a fairly-steep climb to the top of Plowboy Mountain, followed by a descent through an idyllic forest landscape to the Western shore of Upper Priest Lake. 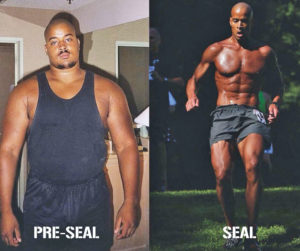 Right: David Goggins, before and after joining the U.S. Navy Seals. Courtesy photo.

After our climb, we spent a lazy mid-afternoon hour relaxing by the lake, enjoying the cool water and the picturesque landscape laid out before us. We walked the final five-mile stretch fast, hoping to get to the car in time to take an evening swim before nightfall. Though several of the people in my group were good hikers, it became clear as we were walking the final mile that everyone was tired. All of us were looking forward to the sight of the car we’d parked at Beaver Creek Campground earlier in the day. When we finally arrived, there was a collective feeling of relief and accomplishment that was very short-lived. The keys to the car we’d just reached were sitting in my car at the Plowboy Mountain trailhead.

We all looked at each other in disbelief. As soon as it became clear that it wasn’t a joke, the thought of the long walk up the dirt road to my car began to set in. Everyone looked exhausted. The couple who weren’t hikers looked dejected. The guy who’d left the keys in my car just looked embarrassed. Three miles? I thought. Tired as I was from the long hike, something in my mind just reset. “I’ll run it,” I said. My companions’ eyebrows raised. I dropped my pack, took a giant gulp of water, and began a slow jog toward the campground exit. Instead of frustration, I found myself smiling in the face of this unwanted challenge.

At the recommendation of a friend, I’d recently listened to an episode of Joe Rogan’s podcast with guest David Goggins. Mr. Goggins grew up in a troubled home, overcoming low-test scores, poverty, racism, and a tremendous fear of water to become only the 36th African-American Seal in the history of the U.S. Navy. Mr. Goggins speaks with the authority of someone who’s forged himself in the hard times he’s lived through, many of which came to him in his early twenties.

Mr. Goggins was working as an exterminator for Ecolab, spraying for cockroaches in restaurants. Often, after working a difficult overnight shift, he’d reward himself with a milkshake. His figure ballooned up to nearly 300 pounds. During one of his worst shifts, Mr. Goggins began to wonder how he came to be living a life he’d never wanted for himself. He realized that he’d ended up there by avoiding things he found uncomfortable. He decided that this was what had to change, “Anything that was horrible that people would normally say no, I had to go do it.”

Goggins quit his job that night and made the choice to chase his dream of being a Navy Seal. But merely thinking it and doing it were two very different things. “I had to invent a guy that didn’t exist. I had to invent a guy that could take any pain, any suffering, any judgment. I had to build this calloused mind.” Part of inventing this new person involved losing 106 pounds in three months to even be considered by recruiters. He biked, ran, lifted weights, swam for hours at a time, and after three grueling months, made his weight goal. A year later, following three hell weeks, David Goggins was a Navy Seal.

And as impressive as Mr. Goggins’s service record may be, he’s since become even more renowned in the world of endurance sports, competing in and winning ultramarathons and even breaking a world record for pullups. Goggins has a rule he calls the 40-percent rule: “Most people quit at 40 percent.”

So there I was, exhausted, stuck at the bottom of the trail after hiking eleven miles—still three miles from the end—and still only at forty percent. I hadn’t run three miles in years, but I knew it was nothing compared to the 100-mile races David Goggins regularly finishes. Along the way, I found myself actually enjoying the run and thinking about what Mr. Goggins has proven: “We have a lot more than we think we have.” In the end, it took a little more than 20 minutes to complete the run.

This weekend, along with several hundred other intrepid folks, I’ll be testing myself again on the Long Bridge Swim.