In a 60-day notice of intent released May 5, the Center for Biological Diversity, Lake Pend Oreille Waterkeeper and Idaho Conservation League notified parties responsible for pursuing and permitting the proposed Idaho Club North Lake project that the conservation groups plan to sue based on alleged violations of the Endangered Species Act. 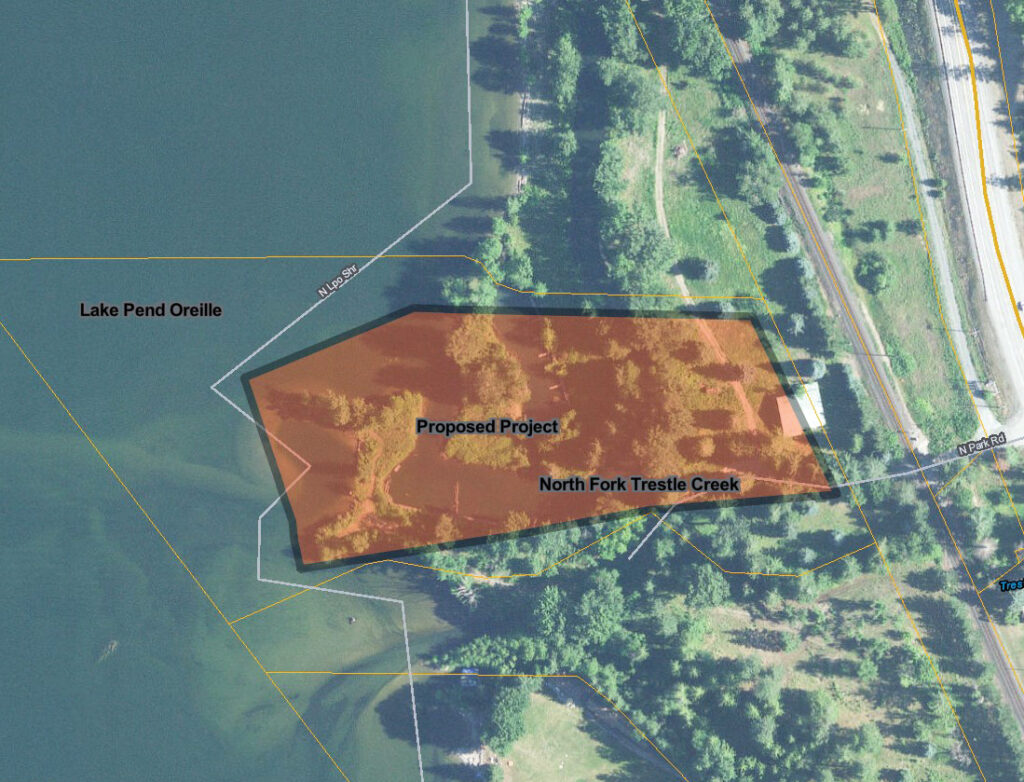 An aerial photo of the projected development area near Trestle Creek. Courtesy photo.

The U.S. Department of Interior, U.S. Fish and Wildlife Service, U.S. Army Corps of Engineers, and Trestle Creek Investments, LLC, are listed as the possible defendants, should the groups opposed to the marina and housing development project move forward with the lawsuit.

According to the NOI, the Fish and Wildlife Service and Corps violated a section of the ESA “by failing to consider and apply best available science to ensure that approval of the Idaho Club Project will not jeopardize the continued existence of or destroy or adversely modify critical habitat for bull trout … a species threatened with extinction.”

“The Idaho Club Project will have clear and lasting impacts on bull trout and bull trout critical habitat,” the notice continued. “The Corps’ ‘not likely to adversely affect’ determination and FWS’s concurrence is therefore arbitrary and capricious.”

Bonner County commissioners unanimously approved the planning and zoning application for the project back in January; and, in conjunction with permits from federal agencies, opened the door for more than 100 boat slips, boat storage, a pavilion and several single-family homes near the mouth of Trestle Creek, located about 13 miles east of Sandpoint on the shore of Lake Pend Oreille.

“If the agencies do not take action to cure the violations of the ESA described above within 60 days, the Center intends to file suit for declaratory and injunctive relief, as well as attorney and expert witness fees and costs,” the notice concluded.

William Haberman, a managing member of Valiant Idaho, LLC — which owns The Idaho Club — declined to comment on the notice. Joseph Saxon, a spokesperson from the Corps, replied to a request for comment, stating that, “[t]he Corps is reviewing the NOI, however, as a matter of policy we don’t comment on pending or active litigation.”

Planner Marty Taylor, a representative of the Idaho Club project with James A. Sewell & Associates, was out of office at the time of request.