‘I guess there is more work for me to do’

“I am John, but everybody calls me ‘Doc.’ Come March, which is coming quick, I am going to be 70… God! I never thought I’d live that long.” 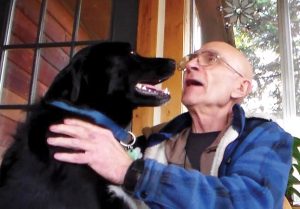 I interviewed my neighbor John “Doc” Ivy back in January, and I was praying that he would make it to 70. He did, and what’s more, he now has a new lease on life.

“Seriously when I went to ‘Nam, when we got off the plane in ‘66 at Tansun Hut in Saigon, we had incoming sniper fire. It was commonplace,” said Doc. “When I got off the plane I gave myself up for dead right then, didn’t worry about it from that point. I figured I’d be dead by 30, and I will be going on 70, so I have been winging it for 40 years, and I am running out of material.”

He says this, but he still has a way of delivering lines that make me laugh. He has often bragged (or confessed) that he is a “triple Aries.” Boisterous, ornery, opinionated and a natural born leader, Doc was an asset in Vietnam, where he was wounded while protecting the men he led. He served five tours (five years!) receiving a Purple Heart and shrapnel that is still lodged in his tibia.

For the last couple years he has battled a formidable enemy: cancer. He went from a muscular 220 pounds to an emaciated 145 pounds. Since Vietnam (when many soldiers were offered a variety of substances to stay awake and improve morale) Doc has been sober.  He neither drinks alcohol, nor smokes cigarettes and his diet is moderate. He says that cancer is sneaking up on all of his Vietnam buddies, sudden like.

Recently the Department of Defense has admitted that anyone serving “in country” (which Doc did for five years) was exposed to Agent Orange. Doc says that Agent Orange stays in the system for life and eventually it takes its toll. He is receiving some compensation for his 100-percent disability rating due to combat wounds, but I can’t help but question if this is enough. Our World War II vets were and are living into their 80s and 90s, but Vietnam vets may not make it that far because of exposure to experimental chemicals.

Diligently, Doc wakes up early and takes care of his beloved animals. Doc and his humble wife include wild animals in their menagerie. They fill their hummingbird feeders each week and feed the deer. Sometimes when I drive by his house I see over a dozen deer in his yard. He calls his house “the Cafe.” And though he has an office with real medieval swords and battle axes and impressive homemade chain-mail (he made them out of wire hangers while meditating), he has no interest in hunting or killing.

For nearly a decade, Doc volunteered at the Bonner County Food Bank, has taught metaphysics classes locally and he has been a superior neighbor.  One example was the year we ran out of firewood in late winter, and my husband had a bad flu. I called Doc because he said “anytime you are in need, call” and he filled my trunk with dry tamarack to keep my family warm. Also, he sends my family his energy/prayers/meditation. He is a mystical man who never ceases to surprise or bless me.

Many years ago I hit bottom. Readers may understand the sort of demons I was battling (unless you are a rare, perhaps even mundane, sort of person that has never had a touch of mental illness).  The demons that whisper how worthless I am and that I would be better off dead are not as powerful as they once were, but one night they were too much for me or my family and Doc was whom I turned to. He didn’t respond to my desperation the way that I thought he would. He didn’t pity me. He helped me get out of the battlefield in my own head by making me laugh. I walked home light, amused by life, armored with humor; I was granted extra life.

Last Christmas we passed Doc as he was walking his dog. I hugged his thin frame and he told me that he had been unable to swallow: “I think this will be my last Christmas,” he said weakly. For the last couple years Doc has had treatments to have his esophagus ballooned open so that he could swallow (he was battling a type of esophageal cancer). I thought he might die in days.

He was ready: “I have said my goodbyes, my paperwork is in order… the only regret I have is that I don’t have more regrets…” he joked, as though he hadn’t lived a feisty enough life.

When I got a hold of him around New Years he was still alive, “Neither Hell nor Heaven will take me,” he joked, “they are afraid I would try to run the place.”

Shortly after his 70th birthday he received the best gift; extended life! At his appointment at the V.A. this April, Doc was informed that there is no trace of his cancer. After years of surgeries, exhausting treatments, and the feeling of living on “death row,” he is now miraculously free from cancer.

“I guess there is more work for me to do,” Doc says about life after 70 and life after cancer. And his eyes sparkle with wondrous possibilities.