Football legend Jerry Kramer received a hero’s welcome at Sandpoint High School Friday in a visit honoring his induction into the Pro Football Hall of Fame this year. 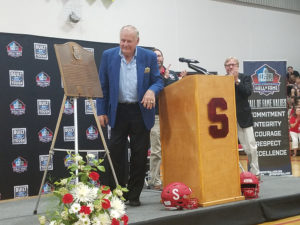 Kramer told SHS students that while achievement and ambition are important, they’re hollow without a commitment to decency and moral character.

“The only thing left … is to lead a life of excellence and quality and make the world a better place because you were in it,” he said.

The event was put together by Sandpoint High School, the Pro Football Hall of Fame and Rokstad Ford. According to Chris Knowles, SHS athletic director, Kramer gives students a role model to emulate. Likewise, Dave Brooks of Rokstad Ford said Kramer is proof that the starting point is just as important as the destination on the road to greatness.

“Today is special because it helps connect a player who has reached the pinnacle of pro-football glory with the community where he began his journey,” Brooks said.

Early this winter, the Pro Football Hall of Fame announced Kramer would be enshrined with its 2018 class. Many sports writers and commentators considered the recognition of Kramer’s 11-year career with the Green Bay Packers, which included two Super Bowl championships, long overdue.