With Lost in the ‘50s and Memorial Day weekend in the rearview mirror, the city is moving forward on a few of its long-planned construction projects. 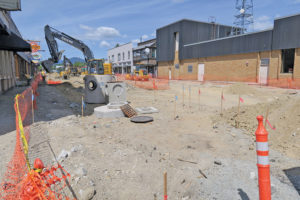 Most prominent is the work on Cedar Street. As phase one of the downtown revitalization project, the work that will overhaul Cedar Street amenities, landscaping, utility infrastructure and sidewalks for a more walkable, attractive downtown core. Work is currently centered on Cedar between Second and Third avenues, which began after Lost in the ‘50s and will progress until mid-June. Next, work advances to Cedar between Third and Fourth avenues from late June to late July and finishes on Cedar between Fourth and Fifth avenues between late July and late August. Afterward, the street will be closed from Second to Fifth avenues for about 10 days for final paving, striping and landscaping.

The downtown revitalization project isn’t the only one progressing in a busy summer construction season. Crews are also working on North Ella Avenue improvements from Chestnut Street to Pine Street. With work starting after Memorial Day, crews will be trimming or removing blocking shrubs, installing traffic control devices and performing minor excavation, saw cutting, utility work and grading through the end of May. Throughout June and early July, they’ll move on to concrete placement, asphalt removal and asphalt paving, with work expected to end mid-July.

Residents should also mind the bike path and sidewalk construction on Oak Street. Another project that began after Memorial Day, it is designed to bolster safe pedestrian and bike routes to local hot spots like City Beach. Work between Fifth Avenue and Boyer will result in new sidewalks along both sides of Oak, as well as bike paths from Boyer to the Community Trail. Work is expected to continue to the end of August.