For every situation, there is the perfect knot.

Recently, Cadie and I completed a voyage across the Atlantic Ocean on a 39-foot sailboat. While I’ll save the story about the journey for a later issue, I thought it might be useful to share some of the practical knowledge I gained from this voyage. In particular, some of the knots I learned to tie while sailing (and many I learned years ago) are pretty cool and should be shared.

But first, why is it important to know how to tie certain knots? Can you live without them? Sure, I guess so, but eventually, you’re going to need to know how to tie a knot that serves a better function than the granny knot we tie our shoes with.

Knowing how to tie the right knot for the right situation is pretty important. It could save your life in a survival situation, or it could simply make your life easier while camping, boating or puttering around the house. Knot tying is a simple mechanical skill that takes a little practice (repetition is key), but once you have a knot down, chances are you won’t forget it.

One trick to learn is to obtain a length of rope about a yard long and take it with you when you might have some extra time to kill. Used in tandem with a knot-tying book, you can kill time and improve your skills at the same time.

Most knots are chosen for a particular scenario based on their general purpose. Do they create a loop in a line? Do they combine lines? Are they used to lash poles together? Are they for attaching a rope to a particular object?

Some are absolutely essential. Others merely decorative.

For the first three knots of this series, I’ve chosen three of the most useful knots there are: the bowline, the clove hitch and the square (or reef) knot. 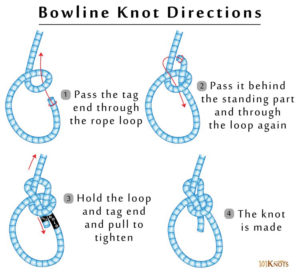 If there ever was one knot to learn how to tie, this one is it. If tied correctly, the bowline knot will not slip, making it ideal for climbing and rescue situations. It is easy to tie and easy to untie, even when under a load. You can use a bowline to secure shelter material or tie a loop at the end of a line. A bowline will hold when tension or pressure is applied. You can even make a bowline big enough to secure it around your waist when descending a cliff or making a river crossing. It is often called “king of the knots.”

1. Make a bight (or loop) near the end of the rope and pass the end through the rope loop from underneath.

2. Pass the end behind the standing part and through the loop again.

3. Hold the loop and the end and pull to tighten.

4. You’ve tied yourself a bowline knot. 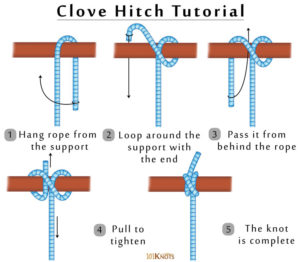 This knot is ideal for tying a rope off to an object, such as a tree or railing. You can use it to lash poles together for a shelter, or secure your gear to a pack or a vehicle. This knot is useful when the length of the running end of the rope needs to be adjustable, since feeding in rope from either direction will loosen the knot to be tightened at a new position. However, it can slip with certain types of rope. It can also jam with smaller diameter cords, making it difficult to untie. It is also unreliable when used on a square or rectangular post, rather than round.

1. Pass the end around the pole or support.

2. Loop the end around the support by passing over the previous line.

3. Pass the end from behind the rope into the “crotch” between the far loops.

5. You’ve tied yourself a clove hitch. 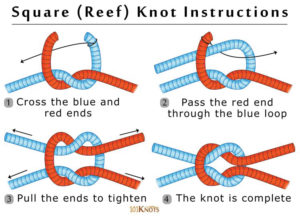 Use this ancient knot (also referred to as a reef knot) when you want to tie the two ends of a single line together such that they will secure something, such as a bundle of objects, that is unlikely to move much. The knot lies flat when made with clotch and has been used for millennia as a bandaging knot, as well as to tie belts and sashes. It is not, however, recommended if you want to combine two different lengths of rope together (you would use a sheet bend for that, which I’ll share next week).

1. Take the two ends of the rope (represented by different colors in the illustration below) and cross them. Make a loop with the right hand (blue) line.

2. Pass the red end through the blue loop.

3. Pull the ends to righten.

4. You’ve tied yourself a square knot.

Check back next week for the sheet bend, the figure-eight knot and half hitch.