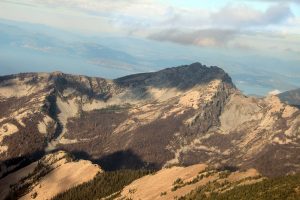 The Scotchman Peaks could well become wilderness if a U.S. Congressional bill passes next year.

After years of work, local conservation workers are celebrating a newly-introduced federal bill to enshrine the Scotchman Peaks as wilderness.

Introduced this week by U.S. Sen. Jim Risch, the bill calls for the protection of 13,900 acres of mountainous land throughout North Idaho. The legislation is designed to preserve the hiking trails, mountaintop vistas and other recreational features of the area for the public, as well as protect the varied wildlife species and old-growth forest. Of course, there’s always the mountain goat herd—the de facto wilderness mascots and occasional people-biters—to think of, too.

“We are grateful to Senator Risch for introducing this bill,” said Phil Hough, executive director of the Friends of Scotchman Peaks Wilderness. “There is tremendous support for protecting this special part of Idaho as wilderness for the benefit of present and future generations.”

The push for wilderness designation is a decade-long effort by the Friends of Scotchman Peaks Wilderness, which formed in 2005 as advocacy group for the proposal. Over the course of several years, the organization’s staff and volunteers have accumulated a broad base of support, including a key endorsement from Idaho Forest Group, North Idaho’s largest timber company.

Also among the supporters are 6,700 individuals, 80 percent of whom live within two hours of the Scotchman Peaks. Several newspaper editorial boards and local politicians endorsed the measure as well, with the Bonner County Board of Commissioners signing on last year.

“Bonner County residents strongly support protecting the Scotchman Peaks,” said Commissioner Chairman Cary Kelly. “Anyone who has hiked to the top of the peak understands the majesty of the area and the importance of preserving it.”