Kaylee Cole: A musician and more

Rarely is an artist’s origin story as unforgettable as Kaylee Cole’s. 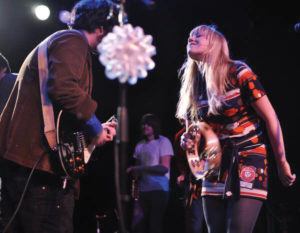 Kaylee Cole on stage with one of the many bands she’s played with over the years. Courtesy photo.

The Seattle-based singer-songwriter experienced a brutal car wreck in college. As Jeff Buckley’s “Hallelujah” played, the car’s radio knobs pierced Cole’s legs. She recounts the story as a turning point in her life that led her to pursue music.

“All of a sudden I started writing and singing, and I hadn’t considered myself a musician until that point,” she said.

Cole will play two shows in Sandpoint next weekend: the first at Evans Brothers Coffee Roasters June 7, and the second at the Pend d’Oreille Winery June 9.

Her first performances happened in Spokane, a place Cole said nurtured her as a young musician. She released her first album in 2008 and worked on several projects until 2012, when a publishing battle brought her music to an abrupt halt. Cole’s previous work and anything she planned to produce no longer belonged to her. She said the situation “silenced” her until 2017. Still, she now sees a silver lining.

“Because I couldn’t focus on my own music projects, I was able to expand as a businesswoman and a human,” she said.

During her time away from making music, Cole moved to Los Angeles and spent her time working in event production, music supervision, film scores, dance and more. Today, one facet of Cole’s professional life is her work as a “holistic producer.” In a nutshell, holistic producers create experiences — whether they be an event, film, retreat or show — while keeping things like self-care, spiritual well-being and even astrological factors in mind. Cole said she considers herself a sort of “spiritual stage mom.”

“Not only do I care about being under budget, I care about, ‘Did we eat today?’“ Cole said. “It’s about encouraging people to take the best care of themselves so we can create our best art.”

Cole recently traveled to Telluride, Colo., to attend the Mountainfilm Festival, where they screened a short documentary she produced called “The Mystery of Now.” The documentary centers on Apache artist Douglas Miles and the youth that represent his skate brand, APACHE Skateboards. Cole said she started working on “The Mystery of Now” in 2017. The 16-minute film is now available to watch on YouTube.

“I’m really grateful for the experience,” she said, adding the documentary was well received in Telluride. “It’s nice, two years later, to celebrate it in this really cool way.”

Cole’s June 7 Sandpoint show will also feature solo performances from Josh Hedlund and Ben Olson, who both intend to play mostly  “B-sides” — more of their lesser known and new songs. For Cole, it will be an opportunity to play her new songs, which she said are “really honest” and reflect how much she’s grown during her musical hiatus. She said she resented the situation while she was in the midst of it, but now she knows it only forced her to broaden her horizons and explore her other passions.

“I’ve learned you can take away the likeness of my image and my intellectual property, but you cannot take away the fact that I can show up in a small town and sit behind an old piano and make everybody laugh and everybody cry,” she said.

The June 7 show at Evans Brothers Coffee Roasters starts at 7 p.m. and there’s a $10 suggested donation to get in. BYOB.