I’ve always been fascinated by how something gets its name. People have been asking questions about the origins of words since the time of the Greek philosophers. Why is a nose called a nose? Why not call it a fluegenbooger or a reynopsis? 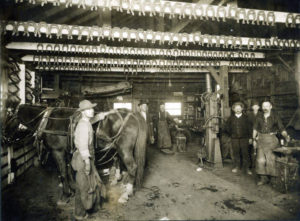 The interior of a blacksmith shop at 210 Pine Street in Sandpoint circa 1915. Photo courtesy Bonner Co. Historical Society.

When it comes to languages, etymologists (those who study the origins of words, not entomologists, who study insects) can develop language trees that determining how a specific word came to be.

English is a Germanic language, but its lexifier (or the source of its vocabulary) is Latin. That’s why there are similar sounding words in Spanish, Italian, French and Portuguese.

If you take English back up the language tree it goes to Middle English, Old English, West Germanic and Germanic, which ultimately came from the one original source the majority of languages came from known as the Proto Indo European. Because of all these branches on the language tree, the version of a word we use today is often quite different from its original form.

Take the word “apron.” The latin word is “mappa,” the Old French term is “naperon” and the Old English term was “napron.” Because writing in Old English times wasn’t as common as speaking, when Old English speakers referred to “a napron,” they mistakenly believed the speaker was saying, “an apron,” and the term stuck.

Every word in the English word has a complex and interesting history behind its origins. But the same is not necessarily true with placenames. Think of how many streets in America (named after the Italian cartographer Amerigo Vespucci, who first set forth the concept that lands that Columbus sailed to in 1492 were actually part of a separate continent) share the same names. Most are named after numbers, trees or presidents.

This got me thinking: How did our local placenames come to be? Over the next few issues, I’ll delve into the history of why we call our everyday towns, rivers, creeks and mountains what they are called.

This week, we’ll start with the basics.

Translated roughly as “hangs from ear,” or “ear pendant,” Pend d’Oreille was the name early French colonists and traders gave the tribe of Native Americans (now known as the Kalispel Tribe) who were indigenous to the Northwest Plateau. They were named as such because of the large shell earrings they wore. Some erroneously believed the lake was named as such because it is shaped as an ear when viewed from above. There are various spellings of Pend d’Oreille used today, most dropping the lower case “d” from usage. I won’t even go into the phonetic abomination that the town of Ponderay decided to use.

Fur trader and explorer David Thompson is responsible for our town’s name because he mentioned a “point of sand” in his 1809 journal, referring to the site in which the town sits today. This settlement, originally called “Pend d’Oreille,” predated the Northern Pacific Railroad by a couple of years. Early pioneer Robert Weeks opened a general store beside Sand Creek in 1880 after he read a railroad survey that showed this location as a favorable location for future businesses. The community of Venton actually pre-dated Sandpoint. It was located on the south end of the Long Bridge (before the bridge was built) where a railroad construction camp was located. The tracks could go no further across the lake until a bridge was built. After the first Long Bridge was built in 1904, the Venton post office was moved across to the site of Pend d’Oreille and the name Sandpoint was used.

The town east of Sandpoint took its name from the river which flows past it. Explorer William Clark (of Lewis and Clark) first saw the mouth of this river in July 1806 as it forked off from the Yellowstone River. Clark noted that the river’s mouth would make a good place for a fort and named the river Clark’s Fork. Over the years, it has been spelled a few different ways: Clark’s Fork, Clarksfork and finally Clark Fork as it is spelled today.

In 1863, Edward L. Bonner, along with his cousin Richard Eddy and friend John Walton, joined thousands of prospectors who flooded into the area after large amounts of gold were discovered in the East Kootenais of British Columbia. The three men were headed north to the gold strikes along the Wildhorse Trail, but when they arrived at the Kootenai River crossing (at the modern day site of Bonners Ferry), Bonner realized it was an excellent place to build a ferry. Bonner bought the land on both sides of the river from the Kootenai Chief Abraham, and the location would become known as Bonner’s Ferry (the apostrophe has since been dropped). It’s curious that Bonner County was named as such, since Bonner only spent a few months in the area before leaving John Walton to operate the ferry. Richard Fry bought the ferry and trading post in 1875 and applied for the first U.S. Post Office. The town was originally called Fry until 1899 when it was incorporated and the name changed to Bonner’s Ferry, and later Bonners Ferry.

The name “Priest” is believed to have come from the Kalispel word “Kaniksu,” which means “Black Robe,” the name the Natives gave to the Jesuit missionary priests who worked among them. Some old maps refer to Priest Lake as “Kaniksu Lake.” Father Pierre-Jean De Sonef first named it Lake Roothaan in honor of John Roothaan, a fellow priest. It wasn’t until the building of the Great Northern Railroad in 1890 that it was renamed permanently as “Priest Lake.” There is a peak named Mount Roothaan near Chimney Rock that was also named in honor of John Roothaan.

Priest River saw an influx of Italian immigrants who moved into the area to hew ties for the Great Northern Railroad around 1892. The immigrants stayed in the area after construction was completed. Their settlement was known as the Italian Settlement, and later it was called “Valencia,” until it was found there was another town in Idaho named Valentia, so the name was changed permanently to Priest River. It was known as “Little Italy” as late as the 1950s.

Special thanks to local historians like Nancy Foster Renk and Bob Gunter, whose work I have checked to verify my conclusions. Also, very special thanks to the Bonner Co. Historical Society and Museum for keeping history alive.