Predicting nature may ultimately be a fool’s errand, but being prepared for whatever Mother Nature throws at us — especially when it comes to fire season — is something the U.S. Forest Service tries hard to do.

USFS Idaho Panhandle National Forests spokesperson Shoshana Cooper said they use a national outlook to get an idea of what the coming months may hold. Predictive Services and the National Interagency Fire Center produce the National Significant Wildland Fire Potential Outlook (NSWFPO) each month, and Copper said it’s a resource USFS watches closely. 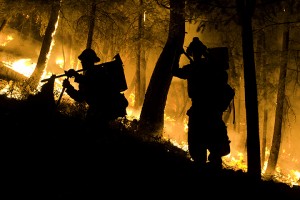 The June NSWFPO predicts North Idaho, Montana and North Dakota — which the NSWFPO calls the “Northern Rockies” region — will see “normal significant” fire potential this season, based on the average snowpack and precipitation. The report sees that potential increasing as the warmer months wear on.

Regardless of current predictions, Cooper said the region’s fire outlook is still largely a mystery until June plays out.

“If June is dry, then we can expect a more significant fire season, despite what happened in April and May,” she said. “If there’s little or no precipitation in June, and higher temperatures, heavier fuels dry out much quicker.”

She said July’s NSWFPO report will be more indicative of what people can expect in August and September.

“Every year is different, but some of the same trends happen each year,” she said. “In June, the temperatures we get are indicative of what the rest of the summer will look like for us.”

Cooper said predictions for the Northern Rockies do not take into consideration fire outlook in Canada or Washington, which is where most of the smoke that plagued Sandpoint last year came from.