As the days grow shorter and we descend into this largely unloved North Idaho winter, Robb Talbott of Mattox Farm Productions is finding a way to get locals looking on the bright side — with Jack Frost Fest. 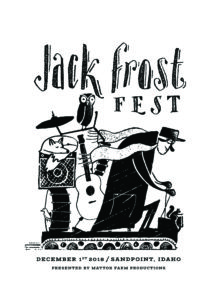 “Not only winter, but late fall/early winter just gets so wet and cold and dark,” Talbott said. “(Jack Frost Fest is) just being able to bring people together and get excited about the snow falling, to look forward the opportunities that winter provides us in this area.”

The second annual Jack Frost Fest is Saturday, Dec. 1, at the Heartwood Center starting at 4 p.m. and slated to run past 11 p.m. The event serves not only as a community gathering, Talbott said, but also as a major fundraiser for some local nonprofits. This year’s featured nonprofits include the Idaho Panhandle Avalanche Center, Selkirk Outdoor Leadership and Education, Sandpoint Nordic Club, Schweitzer’s Ski Patrol Avalanche Dog program and the Pend Oreille Arts Council.

“It’s about giving (the nonprofits) the opportunity to talk to people about what they do, and about things to do in these darker, colder months,” he said.

The event will also include local vendors with food, drink and other goods for purchase, among them Upside Kombucha, Sandpoint Curry, The Hound, Eichardt’s and Crafted Botanicals. On top of all that, Jack Frost Fest attendees can anticipate games, face painting, music all night, the chance to taste some winter beers and a “Cabin Fever” raffle supporting the nonprofits.

Talbott emphasized the family-friendly atmosphere he strives for at all Mattox Farm shows — including Jack Frost Fest — but said that, as the night goes on, things might ramp up a bit.

“It will transition into more of a party,” Talbott said, noting that the final band of the night, Hawthorne Roots, is known for their high-energy shows. “It’s not going to be for the faint of heart.”

But before Hawthorne Roots, playing the 7-9 p.m. slot will be headliner The Two Tracks. Talbott speaks highly of the Wyoming-based Americana four-piece.

“Their vocals almost dance with each other,” Talbott said. “They’re rock and roll, they’re fun, and it’s just beautiful music.”

Dave Huebner of The Two Tracks said he and the band knew that the first and most recent time they played Sandpoint — at the Panida with Moonshine Mountain — would not be the last.

“We all left with a sense that we wanted to get back before too long, not just for the music but for the beauty of the place,” Huebner said.

Huebner said he and the band pride themselves on varying their sound from song to song, representing “a wide span of styles within the Americana genre.”

“The lyrics are worth listening to — telling stories, painting pictures, and carrying messages from experiences true to the American West, while also presenting an environment that will get you dancing and moving to the beat,” he said.

Huebner said the band is stoked to be back in Sandpoint and is particularly excited for the festival atmosphere, where the crowd is there “both to listen and have a lot of fun,” Huebner said.

Other musicians filling out the line-up for this year’s Jack Frost Fest are Browne Salmon Truck, Brendan Kelty and John Firshi.

This is only the beginning for Jack Frost Fest according to Talbott, who said last year was his first attempt at putting on such a large event. He said he’s excited to make it a recurring Sandpoint tradition.

“We’ll learn more and do more next year,” he said. “We’re excited to keep this thing growing.”

Tickets to Jack Frost Fest are $20 for adults, $10 for youth (5-17), and kids under five get in free. A winter beer tasting ticket is $10. Tickets are available at Eichardt’s, Evans Brothers and mattoxfarm.com.