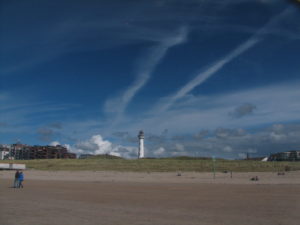 Holland is the land of the bicycle. Around 1900, when industrial countries had the choice between bicycles and cars, Holland did not ignore the cyclists, as most countries did, but built a vast network of safe and convenient bikeways. In 2016, I made a delightful two-week bike tour in the southwest of Holland, and I found it so engaging that, in September the following year, I returned for another expedition. My destination this time was Holland’s province of Friesland in the north.

This projected journey included a worrisome obstacle, however: the 20-mile dam that stretches across the Zuider Zee and connects North Holland to Friesland. This massive dike is the centerpiece of a world-famous reclamation project, completed in 1932. Much of the land of North Holland and Friesland lies below sea level, or at least below the North Sea’s high spring tides, and this dam protects this low-lying terrain.  I wasn’t worried about there being a bike path alongside the highway that ran along the top of the dam. I knew biking is too much a part of the Dutch national character for them to forget this. It was the sheer length of the span that worried me. I would have to peddle for hours and hours out in the middle of the empty North Sea, facing possible storms or fierce headwinds, with no shelter — and no bicycle repair shops in case of emergency.

I began my trip at the north side — the back side, so to speak — of Amsterdam’s central railway station, where a ferry crosses the wide bay known as the IJ. For me and the throngs of other bicyclists, the ferry was free; the 14 cars had to pay. Soon I was tooling smoothly along leafy lanes north of Amsterdam, enjoying vistas of pancake-flat bright green fields and the occasional windmill with its giant arms embracing the sky.

The importance of a bicycle repair shop was brought home on my second day. I was cruising through a little village when my front tire started making a squishy noise. I got off and squeezed it. It was alarmingly soft!

Fortunately, Dutch magic came to the rescue, as it has many times in my biking and kayaking trips in this country. A middle-aged man on a racing bike came by, stopped, and asked if I needed help. He volunteered to find a bike shop that could repair the tire. In the meantime, I got the tire pumped up with the help of the cook in a nearby café who went to his next-door neighbor to get a bicycle pump.

Soon the racing biker came back with news of a bike shop at the seacoast town of Egmond, two miles away. He rode ahead of me while the 10 minutes of air in my tire lasted.  My interactions with all these people, by the way, took place entirely in English, thanks to the Dutch people’s amazing command of our language. I know, I know. I should have been carrying a tire repair kit and a pump. But there is an advantage to being an irresponsible traveler: Your helplessness thrusts you into making connections with the locals. 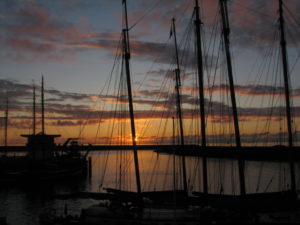 While the tube and tire were being replaced, I walked out among the diving gulls and terns on Egmond’s wide beach, taking pictures of the seascape and the lighthouse that towered against a blue sky crisscrossed with the lacy trails of international jets.

The statue in the town square said a lot about this country’s scale of values. In Holland, you almost never see statues of politicians and generals, which abound in other countries. Instead, the Dutch commemorate artists, authors, and social benefactors.  This statue in Egmond was typical: a roughly-dressed old fisherman from the 19th century, a member of the local volunteer lifeboat association, who invented a cork-filled flotation life vest.

Two days later, I reached my jumping-off point for crossing the dam, the North Holland village of Hippolytushoef (You’re welcome to try to pronounce it; I didn’t dare). In the morning, wanting an early start, I didn’t wait for my hotel’s breakfast. I snacked on liverwurst (for the protein, not because I liked it) and oatmeal cookies. The night before, I had filched two little plastic tubs of Nutella, the hazelnut spread, from the sideboard in the hotel dining room, and I used that to liven up the cookies. The hot water in Dutch lodgings is scalding hot, so I filled a glass with this steaming liquid and called it tea.

By 8 a.m. I had reached Den Over, where the dam begins, and followed the curving bike lane onto the causeway. At the start, my way was blocked by a lowered gate and a red light. A two-mast sailboat was using the lock that runs through the dam, connecting the inland lake (called the Ijsselmeer) to the North Sea.

After a few moments, the boat cleared the lock, the drawbridges came down, the barrier lifted and I was off. Once out on the dam, I saw it had two levels. The highest part faces the North Sea, its sloping side covered with heavy stone facing to withstand the bashing waves. On the inland side, about 20 feet below the high part of the dam, runs the four-lane highway with the separate bike path alongside it. The dam and its highway stretched straight as an arrow, as far as the eye could see, disappearing into the mist miles away. I had to take it on faith that there was land at the other end of the ocean.

Traffic on the highway was heavy, including many big cargo trucks. I had the bike lane to myself, meeting only one other biker, a serious cross-country racer in Lycra shorts and wearing a helmet. (In Holland, ordinary street bikers don’t wear helmets; it’s considered sissy.)

Within a few minutes pedaling I saw that my fears about this crossing were unfounded. I had lucked into virtually perfect conditions, with the air calm and the sun poking gently through light clouds and mist. The kilometer markers alongside the path enabled me to measure my speed; my calculations showed I was averaging 18 kilometers (12 miles) per hour. I stopped several times to walk up the grassy embankment to the top of the dam and take pictures of the North Sea — which had only tiny wavelets on this calm day. In just two hours I had made it to Friesland, the first sight of which were wind turbines with their blades lazily turning in the light air.

Actually, the most dangerous biking moment in the whole trip occurred several hours after I had left the dam behind, and was heading for Harlingen where I planned to spend the night. A farmer had allowed me to take a shortcut across his fields, riding on his private road which was paved with large concrete slabs. In the middle of the lane, between the slabs, there was a two-inch gap, which I assumed was filled with packed earth. However, underneath the bits of dead grass lying on top, the gap was empty air. When my tire crossed over it diagonally, it fell six inches into the crack between the slabs. 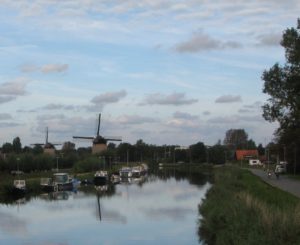 Bike path along the canal.

If I had been riding the “boy’s bike” I have at home, with the high center bar, there would have been no time to fling my leg over to dismount. I would have been dashed on my face into the concrete, coming away with a broken wrist — even a cracked skull (a helmet is for sissies, remember).

Well, as it happened, the street bike I had rented in Amsterdam was — as are most Dutch street bikes — the “girl’s bike” style, with low center bars. When my tire dropped into the crack, I instantly stepped through the low frame, in a perfectly calm dismount. I lifted the tire out of the crack and continued on my merry way.

By mid-afternoon I made it to Harlingen, found a charming little hotel, and set out to enjoy a walk around town. I was especially tickled by the way the Dutch shops played with English in their names and advertising. One café had a sandwich board on the street that said, “When nothing goes right, go left!” with an arrow pointing left into the shop. Several women’s clothing stores had adopted English names: No Boys Allowed was one; another called itself Buyou 4You (I could hardly figure that out, and English is my native language!). The signboard in front of another store said, “You Are Dangerously Close to Fashion!” Try to imagine this display of linguistic wit in the U. S., with American merchants making signs playing on words in a foreign language.

In the evening, after enjoying a serving of veal picatta, its red sauce artistically decorated with two green basil leaves — the Dutch are experts at food presentation — I made my way to the Harlingen harbor. There, along with local sightseers, lovers and dog walkers, I watched the orange sun set behind the masts and stays of the local sailboat fleet.