A plane touched down at Felts Field in Spokane on May 12, carrying arguably the cutest and most valuable packages possible: puppies destined to become service dogs for Canine Companions for Independence. 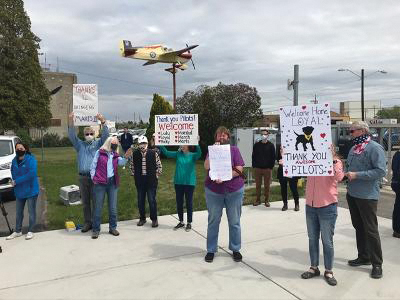 A group of puppy raisers wait at Felts Field in Spokane on May 12. Photo by Lilly Mitsui.

The plane — donated for the cause by a business owner from Santa Rosa, Calif. — arrived in Spokane after dropping off other puppies in Boise and Great Falls, Mont. Volunteer puppy raisers met the plane on the tarmac.

“It couldn’t have been better,” said the organization’s Inland Northwest Chapter President and Sagle resident Lilly Mitsui. “It was just perfect.”

Canine Companions for Independence is a national nonprofit dedicated to raising, training and providing service dogs to people at no cost. Once the puppies are weaned at 8 weeks old, they are sent to live with volunteer puppy raisers for a year and half. During this time, they attend regular training classes and focus on developing social skills. Dogs then leave their puppy raiser and move into other areas of training, with the ultimate goal of becoming an assistance dog for people with a range of disabilities.

Mitsui said 29 puppies have taken the first step on their journey in the past few weeks thanks to the generosity of the Santa Rosa businessman, who told her he has friends involved in the organization and feels passionate about the program. Mitsui said his actions made sure the cycle of Canine Companions for Independence could continue, even amid the ongoing COVID-19 pandemic. She said there is a constant waitlist of up to 400 people who need a service dog from the organization.

“The puppies who were bred and born have been stationary,” she said. “We were lucky to get six puppies up here to people that were waiting for puppies to raise, and to ultimately get more graduate dogs out there.”

Of the six puppies that unloaded in Spokane on May 12, two headed to Moscow, one went to Priest Lake and three headed to Sandpoint-area volunteers.

First-time puppy raiser and Bonner County resident Cheryl Bailey met her pup — a male black labrador named Loyal — at Felts Field. She said she wanted to raise a puppy after seeing how much work and money a friend had to invest in order to train a service dog for her friend’s disabled son. Through Canine Companions for Independence, the training and expenses are handled by the nonprofit and its many volunteers, resulting in a fully-trained service dog — valued at $50,000 — given to people in need at no cost.

“I thought it would be nice to give a puppy a good start,” Bailey said. “I think it’s a really good program.”

She said it was an exciting surprise to find out that someone would be flying puppies to Spokane despite coronavirus-related travel restrictions — she figured it would be a while until she’d be paired with a puppy.

Loyal will call North Idaho home for a year and half before heading off to further training in California, then — if all goes well — he’ll be placed with his new family as an assistance dog for someone in need.

“I just want to acknowledge all the people who volunteered their time,” Bailey said, making note of everyone from the pilots to the breeders. “It takes so many people to make this work. … A lot goes into it, and it’s awesome that people are willing to do that.”