Local businesses are making good use of Kitchen Ponderay

Oftentimes, the only thing standing between a food-based entrepreneur and success is access to a commercial space where their business dreams can be realized.

For locals, that was the Bonner Business Center kitchen until its closure in 2014. After a nearly five-year hiatus, small business owners in need of industrial-grade cooking appliances have a place to go: Kitchen Ponderay. 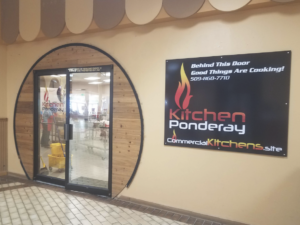 he front entrance of Kitchen Ponderay, which is located inside the Bonner Mall in the former space of the Hideaway Lounge. Photo by Derek Blumenschein.

“All they have to do is bring their ingredients, and they’re good to go,” said Jayme Cozzetto, director of four commercial kitchens throughout the Inland Northwest.

Kitchen Ponderay, occupying a 1,540-square-foot space in the Bonner Mall, is the result of collaboration between local contractors and several large grants. Cozzetto said he’s gone from serving just four businesses with Kitchen Spokane when it was opened five years ago to providing space for over 135 businesses with just three kitchens in Spokane, Spokane Valley and Coeur d’Alene in 2018.

“The need has been nuts,” he said. “It seems like the right industry to be helping people in.”

Kitchen Ponderay opened in January and has already attracted a handful of small North Idaho entrepreneurs, including the makers of Understory Chai, a tea concentrate that can be found at Di Luna’s Cafe, Winter Ridge Natural Foods and beyond. Before Kitchen Ponderay opened, business owner Johnelle Fifer said she was using her commercially licensed drive-thru coffee stand in downtown Sandpoint to brew up batches.

“We can produce seven times the amount of chai at Kitchen Ponderay in the same amount of time,” she said. “Needless to say, we love having access to the kitchen.”

Clients have 24/7 access to the kitchen for an hourly rate, as well as options for overnight storage and use of pots, pans, utensils and industrial appliances that came from the BBC.

Derek Blumenschein, owner of Sweet Heat Company, has also found solace in Kitchen Ponderay. He said he relied on the BBC when he started making and selling his pepper jellies and jams in 2010. When it closed, Blumenschein said it was a serious blow to Sweet Heat’s momentum. 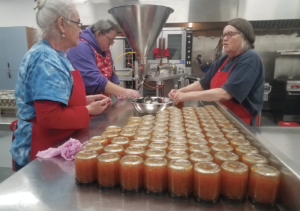 “Just as I was gaining customers and doing larger batches I had to downscale and keep things going,” Blumenschein said.

Sweet Heat operations resumed at the Bonners Ferry Senior Center when the space was available, but Blumenschein was only able to make and hand-fill about 80 jars of product in an hour and a half. In the same amount of time, he can produce and fill more than 200 jars at Kitchen Ponderay thanks to equipment like a 40-gallon kettle and jar filler.

“With the help of my mom, other family, friends and a few wonderful employees the venture I started can continue to grow,” Blumenschein said. “I look forward to continuing to provide product full of flavor and produced with top quality ingredients in beautiful North Idaho.”