North Idaho author Michael Jacobson started writing in the 1980s, but did not pursue the trade seriously until 1993, when he was discharged from the U.S. Army after 17 years. He’d also just gotten divorced, and “getting out of the military and trying to transition back into civilian life” was “really difficult,” he said.

“I was living on a shoestring most days, and I used the writing and the poetry to help me understand … It was my therapy writing at that time,” Jacobson said.

But why writing? He said it was partly in his blood — his dad was a writer — and partly a calling. 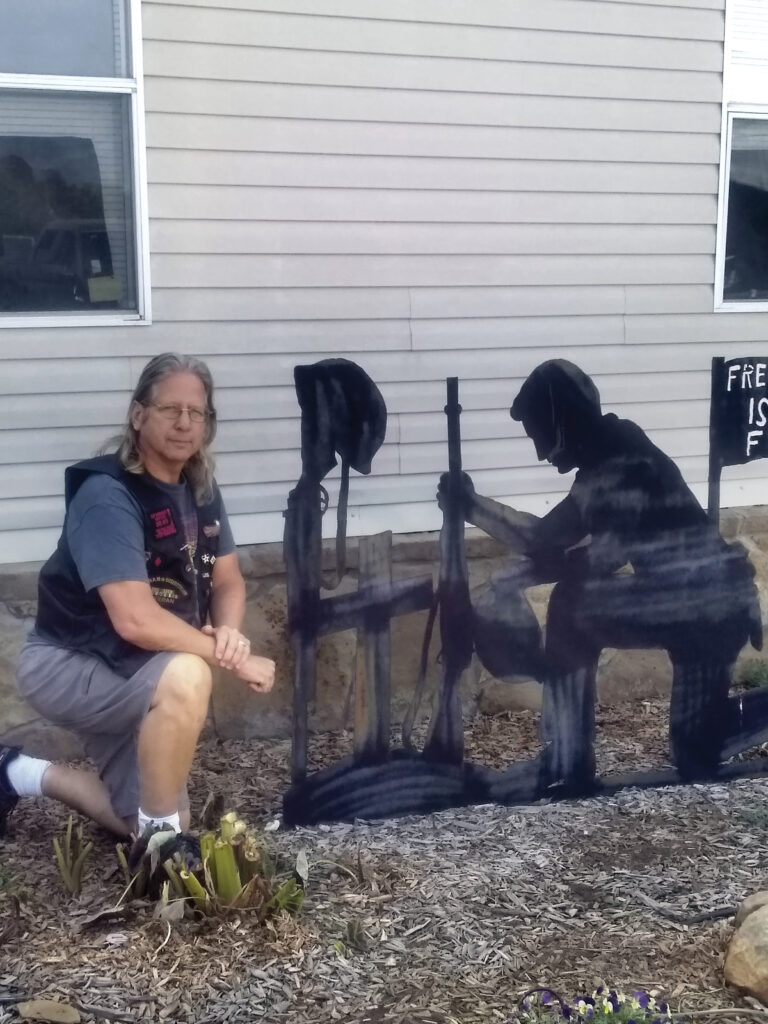 Michael Jacobson showing respect during a trip to the memorial museum in Lake Mineral Wells in Texas.
Courtesy photo.

“I think it was just ingrained in me, whether it came from my dad or whether I just had a part of that in my spirit anyway,” he said. “I think it was a combination.”

He published his first work, a children’s book titled The Adventures of Horse and Coyote, in 2010.

Jacobson said he started writing children’s books because “that’s our future generation, and they’ve got their own stories that they haven’t learned how to tell yet.”

“I want to kickstart that thinking,” he continued, “to let that child know that he or she is an important part of our society and here’s where you can start. I had trouble finding a starting point in many aspects of my life, and I wanted to not only give a child a starting point to go from, but I wanted them to learn lessons along the way without realizing.”

Jacobson also publishes books about his time in the military, and encompasses the stories of other veterans in his writing. His first veterans’ book, A Soldier’s Tour of Duty: War, Peace, and Protest, came out in 2018.

“I want other veterans to know [their stories are important]; whether you get someone to help you write your story when you’re ready to release that,” he said, “or whether you just read about someone else’s experience and think, ‘Yeah, I can relate to that. I think it’s time to let this struggle I’ve got going, go.’”

Jacobson is also the author of two poetry books: A Veteran’s Cry: The Journey Home and I Sometimes Feel Alone.

He is still collecting stories for future veterans’ books, and hopes to meet more fellow service members — both men and women — in the process.

“When people think of veterans they think of men, only,” Jacobson said. “We have a lot of female veterans that have been completely forgotten. I want to change that. They took the same oath we did, and they deserve the same respect, but they have not gotten it, and that pisses me off.”

Jacobson said that vets often tell him that they don’t have anything to share because nothing “bad” happened to them or their unit while they served. Jacobson said it is important to share the humorous and good memories, too. All stories will help humanize veterans, he said.

“We’re human beings as well,” he said. “Just because we put on a uniform, we didn’t change into something else. We’re still human, just like you.”

Find Jacobson’s books at East Bonner County library branches, and for purchase at Vanderford’s in Sandpoint and online on Amazon. Vets interested in sharing their stories with Jacobson, or those wanting to know more about his work, can email the author at [email protected]

Tags: a veteran's crymichael jacobsonthe adventures of horse and coyote