How effectively can a fart convey the human experience?

That’s the question filmmakers Daniel Scheinert and Daniel Kwan, known professionally as Daniels, tackle in “Swiss Army Man,” an absurdist comedy starring Paul Dano and Daniel Radcliffe. With a plot seemingly cobbled together from the weirder corners of the internet, “Swiss Army Man” is a movie that could only be conceived by the younger generation. It lands at the Panida Theater at the end of the month as the latest installment in the Reader Reels film series. 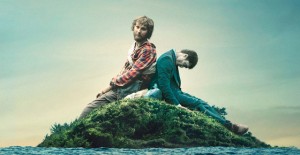 Dano, fresh off bravura turns in movies like “There Will Be Blood” and “12 Years a Slave,” steps into considerably different territory as Hank, a man marooned on an island. Despairing any rescue, Hank’s suicide attempt is botched when he discovers the washed-up corpse of Manny, played by none other than Hogwarts alum Radcliffe. The flatulent corpse proves surprisingly versatile. His stiff arms chop firewood, his cadaverous tumescence shows the way home like a compass, his stomach carries fresh water and his gas-filled insides propel Hank, riding his dead friend like a jet ski, across the ocean to the mainland.

If you’re a bit bewildered after reading that description, you’re not alone. “Swiss Army Man” rocketed into the public consciousness at the beginning of the year when confused audience members fled the theater at its Sundance Film Festival premiere.

Ultimately, it was probably the best possible outcome for the movie. The ensuing headlines about “Daniel Radcliffe’s farting boner corpse movie” struck a chord on the internet, the natural habitat for bizarre, surreal humor. A second Sundance screening was much more warmingly received, with audience members laughing in disbelief from beginning to end.

If “Swiss Army Man” was just a series of absurdist visual gags, it probably wouldn’t amount to much. Perhaps more shocking than the premise itself, however, is the fact that the directors attempt to craft a visually and thematically compelling movie from the madness. “Swiss Army Man” is a surprisingly handsome film, and Scheinert and Kwan, regarded as two of the most visually creative young filmmakers working today, fill the frame with lush imagery and color. The film shoots for real pathos, and once Manny regains his powers of speech, he and Hank share heart-to-hearts about existential meaning and the beauty of life.

It’s probably no surprise that the movie’s concept started as a joke between the two directors. Eventually, they took it as a challenge: What was the best movie they could make from the worst premise they could imagine? “Swiss Army Man” is the result.

It probably won’t surprise you that based on reactions so far, “Swiss Army Man” is a love-it-or-hate-it movie. On the other hand, the one thing it isn’t is bland, derivative or forgettable. In a cinematic era of remakes and franchise sequels, we need as many of those movies as we can get.

“Swiss Army Man,” the third installment in the Reader Reels film series, plays 8:30 p.m. July 29 and 30 at the Panida Theater. Tickets cost $7.50. The film is rated R for language and sexual material.