The Reader tries out the Sandpoint Library’s new virtual reality room. It was awesome.

As a regular part of her job, Vanessa Thiele encourages people to walk the plank, cast spells, put out fires and create black holes. All in a day’s work, I suppose. 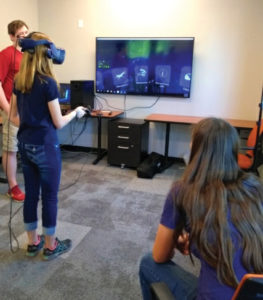 Thiele works at the Sandpoint Library in emerging technology, and is one of the tech staff in charge of the virtual realty room, or as Thiele calls it, “the room of happiness.”

The VR room is one of the many new additions to the Sandpoint Library, and it has made a splash with patrons young and old since it was added last year. Once only accessible by first come, first served walk-ins, the increased popularity of the VR room has led library staff to include a reservations day on Saturdays for those who may not want to wait in line.

The room features an HTC Vive headset and controllers, a large flatscreen television and a powerful gaming computer to run the more than two dozen game titles available to play.

“This is a very immersive system,” Thiele said. “Some people have VR apps on their phones, but this blows those completely away.”

Thiele said the response to the VR room has been overwhelming.

The room has two base stations in the room which track your headset and handheld controller movements. When the tech staffer switches on the system and places the headset on the player, the virtual reality experience begins. The player sees through the headset, while everyone else in the room can watch the game progress on the large flatscreen.

Having never experienced virtual reality before, I was ready to be amazed. I wasn’t disappointed.

Of the 26 game titles the library currently features (with 10-15 more coming soon after they’ve been vetted by staff), Thiele said a handful are the most popular.

“‘Richie’s Plank Experience’ is one of the most popular,” said Thiele. “It triggers that fight or flight feeling inside of us. I promise, it’s not real!”

In this game, you board an elevator and head 80 floors up, where a tiny plank of wood is extended off the side of the building. Peering over the edge, even though I knew I was safe in a warm room in North Idaho, my heart skipped a beat and my knees began shaking. No matter what I did, I couldn’t force myself to walk to the edge.

Then, an umbrella appeared on the end of the plank. Using the controller functions, I “grabbed” the umbrella and Thiele encouraged me to step off the plank into thin air.

“No way!” I shouted, but ended up falling off the plank and down the 80 floors to the street below. Game over.

Sweating, I decided to try another title. Similar to “Guitar Hero,” “Beat Saber” is a musical action game where you slash at beats heading your way with a light saber in each hand. Another game, “Nature Trek VR” features stunning graphics and immersive worlds where you can give birth to black holes, explore different landscapes and get back to nature, VR style. In “Waltz of the Wizard,” you are transported to a wizard’s room where you can cast spells, interact with objects and generally explore.

Each game was different, but each new title lets you explore what virtual reality is all about, which is full immersion into a world you may not be able to access in the real world. With a VR system like this totalling thousands of dollars, it’s really advantageous that patrons get to experience it free of charge.

While the lion’s share of patrons who use the VR room are tweens, Thiele said she sees people of all ages try it out.

“It’s great for tweens because it gives them something to do that’s fun and positive,” she said. “But, we have older patrons who are so amazed by this technology and love to give it a shot.”

Library staff vets each title featured in the VR room, only allowing content that is rated teen or everyone.

Theile said the library is hoping to expand the VR room’s hours in the near future.

“Hopefully we’ll get more hours because we’ve had a huge response,” she said.