Prior to the turn of the 20thcentury, a holiday tradition known as the Christmas “Side Hunt” was popular among hunters. Participants would choose sides and go afield with their guns — whoever brought back the biggest pile of dead birds won. 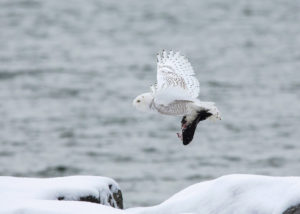 As conservation grew in popularity, many observers and scientists became concerned about declining bird populations across North America. On Christmas Day, 1900 an ornithologist named Frank M. Chapman proposed a new holiday tradition that wouldn’t cause the death of tens of thousands of birds nationwide: A “Christmas Bird Census,” in which participants would observe and count birds instead of killing them. Chapman was a follower of John James Audobon, a mid-nineteenth century naturalist who is credited as the father of ornithology, or the study of birds. The first count saw data from 25 locations ranging from Toronto to Pacific Grove, Calif., tallying around 90 different species on all the counts combined. It wasn’t until 1905 when the Audubon Society formally coalesced into the environmental organization that exists to this day.

Almost 115 years later, tens of thousands of volunteers host their own Christmas Bird Counts around North America. Volunteers brave snow, wind and rain to catalog all species sighted in particular areas, and present the data to the Audubon Society afterward, which then records the information to help monitor the long-term health and status of bird populations across North America.

“The Christmas Bird Count is itself the largest citizen scientist project in the world,” said organizer Rich Del Carlo, an avid birder and owner of Peregrine Tree & Landscape, LLC. “[The Audubon Society] uses the data and analyzes it from the past 100-plus years. It’s not only fun, but the information is used so they can make predictions and see trends in bird populations.”

Del Carlo said the event is open to anyone curious about birding or the outdoors. Those interested should bring binoculars, snacks and dress appropriately for the weather since birders will be hopping in and out of cars at different locations. Since the count utilizes a 15-mile radius around each particular location, areas included will be Sunnyside, Bottle Bay, Lakeshore Drive and the Pend Oreille River. Del Carlo said the event will wrap up with a debriefing at Eichardt’s Pub around 3:30-4 p.m.

Data from this count will join data gained from thousands of other locations to form this year’s snapshot of long-term species help. The Audubon Society has used the nearly 120 years of data gathered all the way back to that first count in 1900 to understand a few things about North American bird populations — including the effect climate change is having on roughly 590 species of North American birds, of which half are likely in trouble. The society predicts that 314 species will lose more than half of their current range by 2080 due to climate change.

For Del Carlo, the bird count is not just an annual tradition — it’s a way to connect with the natural world around us.

“When you’re birding, you’re just really present,” he said. “You’re in the moment with nature. It’s a very gratifying experience.”